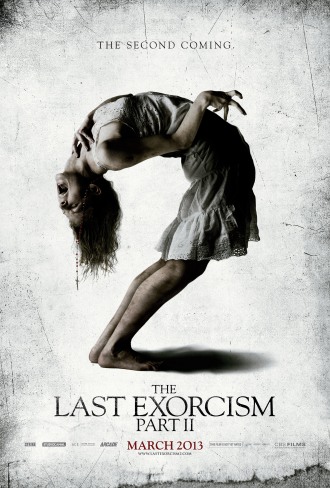 I have a bad habit when it comes to movie sequels: if I’ve seen the first one, then I have to see them all until the series is done- even if the movies get progressively more and more terrible (case in point: the “Paranormal Activity” movies, or the “Saw” series). I suppose it’s just because I don’t like to leave anything, not just movies, unfinished. If I start something, I need to see it through to the end.

I’ll just say it now: I thought “The Last Exorcism”, the first one (which makes the sequel title more than a little silly), was boring and predictable. The plot itself wasn’t actually too terrible: A disillusioned minister, who has perfected the art of “faking” exorcisms to ail people having emotional and psychological episodes, is called in to help a teenage girl, Nell, who is thought to be possessed in Louisiana (of course it’d take place in Louisiana) . Thinking it will be a run of the mill job, he allows a filming crew who are making a documentary to follow him so he can show just how fraudulent exorcisms are. It goes without saying that things go bad very quickly. The bible-thumping Bayou folk don’t take kindly to the minister or his film crew, there’s a pretty good chance Nell is legitimately possessed by an actual demon, and as the minister tries to save Nell, and himself, he uncovers a slew of secrets about the girl’s family, and the town itself.

Promising premise. Poor execution. The movie wasn’t scary (even the actual exorcism scene was boring, with the exception of some bone cracking that made all of us in the theater a little uncomfortable), and the ending left everyone scratching their heads in confusion or shaking their heads in frustration because of how rushed and thrown together it was. It’s available right now on Netflix, if any of you feel inclined to check it out for yourselves.

Regardless, the film did well enough in theaters that they made a sequel, and last night, I headed out to see it with a friend.

*CAUTION: CLICK AT YOUR OWN RISK. INTENSIVE SPOILERS AFTER THE CUT.*

“The Last Exorcism Part II” seemingly begins right after where the first one ended. Apparently, Director Ed Gass-Donnelly realized how terrible the whole “handheld camera” style of filming worked for the original, because this one is filmed like a regular movie, and not through the eyes of a documentary crew. Nell, who somehow managed to survive giving birth to the anti-Christ (I think it was the anti-Christ? Again, the first movie didn’t really explain much of anything) and nearly being swallowed by a gigantic fireball during a Satanic ritual gone wrong, flees into the home of a young couple to take refuge. She’s discovered, still very much emotionally and mentally damaged, and is placed into psychiatric care. We find out that everyone involved in the ritual has perished, her father included, and after extensive evaluation and treatment, Nell is released into the custody of a halfway home in New Orleans for girls going through similar psychological issues (although I doubt all of those girls gave birth to an anti-Christ in the middle of the woods- so I think Nell has a bit of a disadvantage in terms of recovery).

Nell eventually begins to heal. Her nightmares have stopped, nobody from her past has tried to contact her (presumably because they’re all dead), she has a puppy-love sort of thing going on with a boy at her job in a little motel where she works as a maid, and she befriends the girls that live with her in the halfway home, including Gwen, who I didn’t trust from the start and for damned good reason (I’ll get to that later). 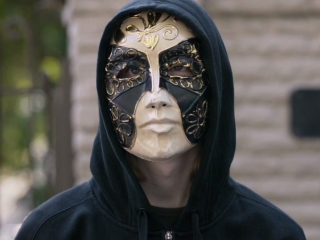 Things seem to be going just fine for Nell until her and the girls go to a Mardi Gras celebration/parade, where she is repeatedly stared at, from a distance, by creepy men in masks that nobody else seems to notice. It isn’t until one of those human statue street performers, who are frightening to begin with, says something cryptic to Nell, that she starts to get the old familiar feeling that maybe something from her past has followed her. From there, it’s a downward spiral- Nell’s nightmares start to return, one of the girls in the house has a bizarre seizure out of the blue in front of Nell after contorting her body in an all too familiar way, ominous shadows follow her at work, she begins hallucinating visions of her dead father, and said visions keep trying to warn her that the demon “is coming for her”.

Nell, already terrified and on the verge of a meltdown, finally reaches her breaking point when Gwen and the remaining girls in the house discover footage of Nell’s exorcism on YouTube. The person who uploaded it presumably located the tape dropped in the woods at the end of the first movie and decided to post it on the internet rather than contact the local authorities to report the overwhelming amount of footage depicting abuse and murder- which judging by some of the stuff I’ve seen posted on YouTube, seems to be a fairly accurate depiction of how such a scenario would go.

The girls, for whatever reason, convey disgust and even amusement at the footage, especially Gwen (I told you I didn’t trust that bitch), and Nell is once again an outcast. She goes to a local church to pray for help, which doesn’t work. Apparently that whole “sanctuary” thing has a loophole for demons, because it follows her into the church and proceeds to creep her out, making her flee. After being badgered on the street by a stranger who has also seen the YouTube video, recognizes Nell, and wants to get a picture with her to show his friends, and who consequently has a seizure much like the girl in the house did earlier in the movie, Nell is approached by a woman, Cecile, who somehow knows her name, knows what’s going on, and promises she can help. I remember turning to my friend and saying “I bet she does Voodoo. You can’t have a movie like this set in New Orleans without having someone who does Voodoo.”

Sure enough, Cecile practices Voodoo, and attempts to summon the demon plaguing Nell. It doesn’t go so well, and Cecile needs to bring in help to perform an exorcism- another one- THE LAST ONE FOR REAL. Before she calls for reinforcements, she explains that she sensed that the demon wasn’t trying to kill Nell, but that it was actually in love with her, turning this movie into the most ridiculous supernatural love story since “Twilight”. She also sensed danger for Nell’s sorta’ boyfriend, prompting Nell to go check on him, and giving us an anti-climatic scene where upon her arrival, she finds him having been possessed. Admitting that he could never love her as much as the demon that’s been following her around and ruining her life, he slits his own throat in front of her, and that’s the end of that part of the plot.

Nell returns to Cecile’s, the reinforcements arrive, and they prepare for the exorcism. While one of the men in the group pours salt around the table where Nell is hooked up to a vital signs monitor, and is strapped down, she gets the procedure explained to her: the team is going to conjure the demon, break whatever hold it has on Nell, and then transfer it into a chicken they have caged up beside the table.

A chicken. A demonic chicken.

Even Nell seems skeptical of this plan, but she goes along with it. It’s a disaster from the start. The demon is way too powerful, more powerful than any of the team anticipated, and when they can’t get it to release it’s hold on Nell after a lot of screaming and walls cracking and crumbling, they opt to kill her instead- injecting a lethal dose of morphine into the saline solution they have hooked up to an IV in her arm.

In Nell’s final moments, she sees the demon, first in the form of her now dead boyfriend, then her father, and then finally, herself. The demon pleads with her, telling her that all she has to do is take his hand, accept him, accept who she is, and she can live. Nell’s vitals flat line, and she lays there for a long moment while the team, still shaken up, prepare to unhook their machinery and sweep up the shitload of salt they’ve left on the floor. For people who have apparently done this before, they seem to forget that sometimes people can have one final rush of adrenaline before they’re gone for good. This happens to Nell, who immediately reaches out and grabs the demon’s hand. Wuh oh.

Cut to a shot of the exterior of the house. One of the exorcism team members is thrown from the window of the top floor, breaking his neck on impact, while the screams of Cecile and the remaining man can be heard from inside. A couple of minutes after the screams abruptly stop, Nell emerges from the house, unscathed, and begins walking down the road to her former halfway home. It’s there that she takes her revenge, thanking the man who had been taking care of her for his hospitality before killing him, and setting fire to the building while the other girls are sleeping. 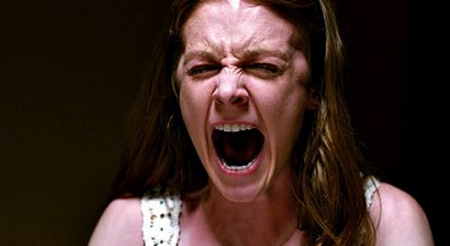 I felt the same way by the end of the movie, Nell.

In the last scene of the movie, Nell gets into a truck parked outside while the house is completely engulfed in flames, and as she drives down the road, every building, and every car, either spontaneously combusts or crumbles as she passes by it. She looks into the rear view mirror, grinning- and cut to the credits.

I can’t say “The Last Exorcism Part II” was particular better or worse than the first movie. They were really about the same in terms of not being all that scary. There were a couple of decent jump scares, which are always appreciated, but it failed to hit the “creepy/chilling” mark that so many of these types of films aim for. The story was significantly weaker, mostly because it really had nothing to do with the first one apart from Nell being the main character, but the acting was better- granted, not by much- but it sort of balanced it out, I guess.

Here’s hoping this really was the last exorcism. I don’t think we need a part three. Ever.

Definitely not worth seeing in theaters (Go see “Stoker”, instead. I heard that was really good), but I guess it’d be worth a view on a rainy afternoon if you’ve got nothing else to do and need to kill a couple of hours.