If any of you reading this have kept up with this blog for any extended amount of time, then you’ll know that I have a tremendous amount of fun reviewing horror movies- especially around October when I completely ruin my recommendations list by watching and ripping apart the worst of the worst- bottom of the barrel horror and slasher flicks Netflix has to offer. I’m scathing, spoiler-filled, and my critiques could be (and probably are) considered borderline mean to anyone involved in the creation of the films. That’s not to say I don’t encourage and support artistic endeavors and efforts- but I live for insane plots, cheesy special effects and shoddy CGI- and I definitely don’t hold back about it.

So I was admittedly pretty surprised when I was actually ASKED to not only watch, but also review an independent horror movie here on Legally Redhead last week. I felt like I would be the last person anyone promoting a film would want to go to, considering my knack for movie-mockery, but I went into the assignment, for lack of a better word- and the film itself- with an open mind. Not too long after agreeing to watch and dissect the movie: 2014’s ‘Come Back to Me,’ I received a gigantic version of the poster shown near the left in the mail. I plan on adding it to my “Horror Den,” which sounds far more diabolical than what it actually is- a spare bedroom filled with all my horror genre-related stuff.

‘Come Back to Me’ is available for rent and download on iTunes, and also as a rental on Charter on Demand. A quick plot summary, per the movie’s IMDB page:

“Sarah & Josh are married suburbanites. After a car accident, Sarah suffers blackouts & ends up pregnant though Josh is sterile. As her life spirals she hides a camera in her home & unlocks a horrific secret with far-reaching consequences.”

Before I begin, I would like to add that despite being asked to review this movie as opposed to just watching it on my own- I critiqued this like I would any other- giving it a final rating which will be revealed at the end of this post.

FULL SPOILERS ARE AHEAD. DO NOT CLICK THE “READ MORE” TAB IF YOU DON’T WANT TO KNOW IMPORTANT PLOT POINTS- INCLUDING THE ENDING OF THIS MOVIE. YOU’VE BEEN WARNED.

END_OF_DOCUMENT_TOKEN_TO_BE_REPLACED

What happens when you take take the concept of “Rosemary’s Baby,” and then proceed to remove all of the elements that made that movie good and instead replace them with a plot riddled with loopholes, bad acting, predictable jump scares, and the nausea-inducing and overused hand-held camera style of filming that has plagued the horror genre for the past few years?

It’s been a while since I sat down to do a good old fashioned horror movie review. Not only because there hasn’t been a whole lot of new horror movies that have piqued my interest as of late, but because my “Horrors of Netflix” review series back in October was pretty traumatic (I’ll be doing it again this October, however- so apparently not traumatic enough.) I saw previews for “Devil’s Due” right around the time they released trailers for “Paranormal Activity: The Marked Ones,” which I contemplated seeing since I’d already suffered through the last two in theaters- but last night I ultimately I decided to pass on “getting motion sickness while this franchise tries to desperately tie the plot from the first two movies into these sequels as much as possible,” and instead went with “getting motion sickness while this seemingly new franchise sets the bar for horror even lower.”

Before you click the “READ MORE” link below, I do want to give the obligatory warning that I will be breaking this movie down and posting a TON of detailed spoilers. If any of you want to see “Devil’s Due” for yourself without knowing what happens- DO NOT CONTINUE READING.

END_OF_DOCUMENT_TOKEN_TO_BE_REPLACED

I have a bad habit when it comes to movie sequels: if I’ve seen the first one, then I have to see them all until the series is done- even if the movies get progressively more and more terrible (case in point: the “Paranormal Activity” movies, or the “Saw” series). I suppose it’s just because I don’t like to leave anything, not just movies, unfinished. If I start something, I need to see it through to the end.

I’ll just say it now: I thought “The Last Exorcism”, the first one (which makes the sequel title more than a little silly), was boring and predictable. The plot itself wasn’t actually too terrible: A disillusioned minister, who has perfected the art of “faking” exorcisms to ail people having emotional and psychological episodes, is called in to help a teenage girl, Nell, who is thought to be possessed in Louisiana (of course it’d take place in Louisiana) . Thinking it will be a run of the mill job, he allows a filming crew who are making a documentary to follow him so he can show just how fraudulent exorcisms are. It goes without saying that things go bad very quickly. The bible-thumping Bayou folk don’t take kindly to the minister or his film crew, there’s a pretty good chance Nell is legitimately possessed by an actual demon, and as the minister tries to save Nell, and himself, he uncovers a slew of secrets about the girl’s family, and the town itself.

Promising premise. Poor execution. The movie wasn’t scary (even the actual exorcism scene was boring, with the exception of some bone cracking that made all of us in the theater a little uncomfortable), and the ending left everyone scratching their heads in confusion or shaking their heads in frustration because of how rushed and thrown together it was. It’s available right now on Netflix, if any of you feel inclined to check it out for yourselves.

Regardless, the film did well enough in theaters that they made a sequel, and last night, I headed out to see it with a friend.

*CAUTION: CLICK AT YOUR OWN RISK. INTENSIVE SPOILERS AFTER THE CUT.*

END_OF_DOCUMENT_TOKEN_TO_BE_REPLACED

Let me just go ahead and get this out of the way right now: I love Guillermo del Toro. I will watch pretty much anything that has his name attached to it. His style of story-telling and his direction methods make for beautiful and compelling films. I feel weird even just calling them films, to be honest. They’re so much more than that. They’re art, plain and simple. He is an artist- and a brilliant one at that.

Although I’m a  fan of his more well-known and critically acclaimed hits, “Blade 2”, the “Hellboy” movies, and “Pan’s Labyrinth”- I’d say one of my all-time favorites has got to be “The Orphange” (in which he was executive producer). I remember being so thoroughly creeped out and moved by the end of it that I could barely hold a conversation with my friends after we’d watched it. I had gotten so wrapped up in the story that when it was over, I was spent.

I’ve been anticipating “Mama” for a while now. Another executive producing endeavor from del Toro, the previews for it made it look like a visually stunning and scary supernatural thriller. Led by Hollywood’s current favorite leading lady, Jessica Chastain, sporting a rather unusual haircut, it already seemed more promising than my last trip to the cinema had been.

WARNING: THERE ARE EXTENSIVE SPOILERS AFTER THE CUT. READ AT YOUR OWN RISK. YOU’VE BEEN WARNED.

END_OF_DOCUMENT_TOKEN_TO_BE_REPLACED 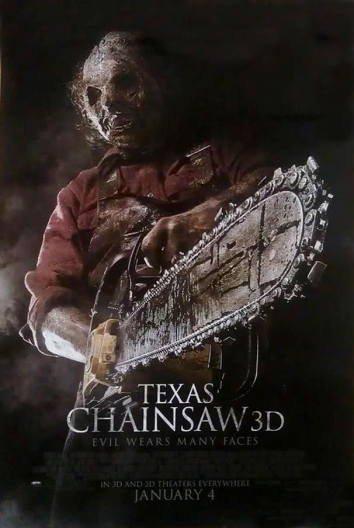 Apart from “The Walking Dead”, my favorite horror franchise is, without a doubt, “The Texas Chainsaw Massacre”. That’s not to say I’ve enjoyed every movie in the series (I like to pretend “The Next Generation” never happened. Sorry, Matthew McConaughey and Renée Zellweger!), but the original 1974 film, which was completely unique for it’s time, coupled with the fact that the actual making of it was bordering snuff film territory- will forever make it a creepy classic that can’t be topped.

And I may be in the minority here, but I thoroughly enjoyed the 2003 re-boot starring Jessica Biel, as well as the 2006 prequel, “The Texas Chainsaw Massacre: The Beginning”. I thought both films were genuinely scary, with just the right amount of gore to make you cringe without being desensitized. They had plots that seemed to have had some actual thought put into them, and they were brilliantly cast. R. Lee Ermey’s ruthless, sadistic, and foul-mouthed Sheriff Hoyt will forever be one of horror’s greatest villains.

So when it was announced that there would be a new installment in the series, I was skeptical. There’s only so many ways to make a family of hillbilly cannibals with a penchant for power tools new and fresh without re-making the original (again), and you can’t really develop long-standing fan favorites like Leatherface without completely changing the franchise’s history. I thought the way the prequel ended was excellent. It tied everything, the re-boot, the 1974 original, and every film afterwards, even the bad ones- together perfectly.

When it was announced the new installment would also be in 3D, my skepticism turned into downright cynicism. I’ve said it in the past that 3D is used entirely too much in movies where it’s not really necessary, but in horror films? It’s almost always cheesy*. Case in point: “My Bloody Valentine 3D”.

*I did enjoy “Saw 3D: The Final Chapter”, but I will openly admit that I was biased, as seeing Sean Patrick Flanery in 3D is an experience every woman should have at some point in their lives- and that adorable Jigsaw puppet in 3D completely cracked me up.

Regardless, I am a dedicated fan of TCM, and on Friday night, I headed to the cinema with my friend Stef to catch a screening of “Texas Chainsaw 3D”. I wasn’t expecting much, but I also wasn’t expecting… Well, this…

WARNING: AHOY. AHEAD THERE BE SPOILERS. CLICK AT YOUR OWN RISK.