When you live in New England, making concrete plans between the months of late November through mid-March can be a tricky thing. Our weather is unpredictable, to put it mildly- and snowstorms/blizzards can delay even the most local of get-togethers. If walking along Boston sidewalks is stressful enough- then NOBODY wants to brave driving or public transport to get where they’re going. Nobody.

Such was the case this past Saturday, when Winter Storm Helena rolled through the Northeast and left highway pileups, plow/sanding delays, and dangerously cold temperatures in her wake. The storm seemed to be a surprise birthday present for my best friend Sean- who had made dinner and drinks plans with a large group of us to commemorate his special day well before anyone even knew the storm was coming.

Sadly, Helena hit earlier in the day than expected- leaving me trapped in Central Massachusetts where I had been running some errands until early Sunday morning when the roads were finally clear. I had attempted to get back into Boston in time for Sean’s party- but after the third or fourth time my poor Elantra began fishtailing on the ice was when I eventually gave up and turned back.

That doesn’t mean we didn’t celebrate in our own way, however. Once I was back in the city on Sunday- Sean and I (as well as our friend Stephen) made dinner arrangements at Grass Fed JP, an all-natural burger joint on Centre Street in Jamaica Plain that cooks up some of the best burgers (and truffle fries!) I’ve ever tasted. I went for The Cali Burger and have no regrets. It was delicious.

They also offer up some tasty sounding alcohol-infused milkshakes, but since I was driving- I opted to save trying those for another time (and also it was way too cold out for milkshakes!) 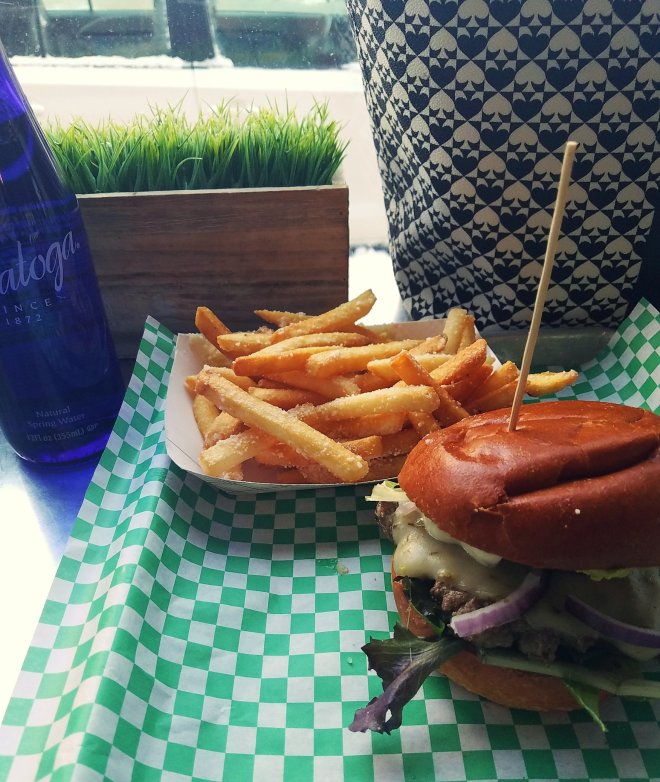 I’m actually tempted to try my hand and making my own truffle fries this coming weekend- so be on the lookout for a recipe post at some point next week! I doubt they’ll be as awesome as Grass Fed’s, but it’s worth a shot.

After dinner- Sean, Stephen and I popped around the corner to grab our caffeine fix (although I stuck with hot chocolate since I was still running on a jet fuel level espresso I had earlier that afternoon) at 7 Pond Coffee Bar. It’s a cute, quaint, and tiny hole in the wall that you may miss if you blink as you pass it- but if you’re ever in the area- you have to drop in. Their cocoa is some of the best around- and Sean couldn’t get enough of his cappuccino, either!

With hot drinks in hand and Stephen heading off to meet up with his family- Sean and I braved the arctic tundra temperatures to take a quick stroll by Jamaica Pond before eventually retreating to the warmth of my car and then the apartment after we returned to Melrose for some much needed video games and binge-watching on Netflix.

My birthday- the next in line- is a couple of weeks away, and I’m just now picking a place for my friends and I to gather for some food and a couple of cocktails. I have a few ideas in mind- but here’s hoping Mother Nature doesn’t intervene and disrupt everything again!

As part of my “blog more/create more content” pledge for 2017- I’m going to start highlighting more of my favorite local eateries, too. Whether they’re old favorites or new finds- I’m always looking for recommendations for good food and enjoy sharing them with others, too. Grass Fed JP & 7 Pond Coffee Bar are just the tip of the iceberg of excellent places to check out in the Boston area!

Have a great weekend, everyone!