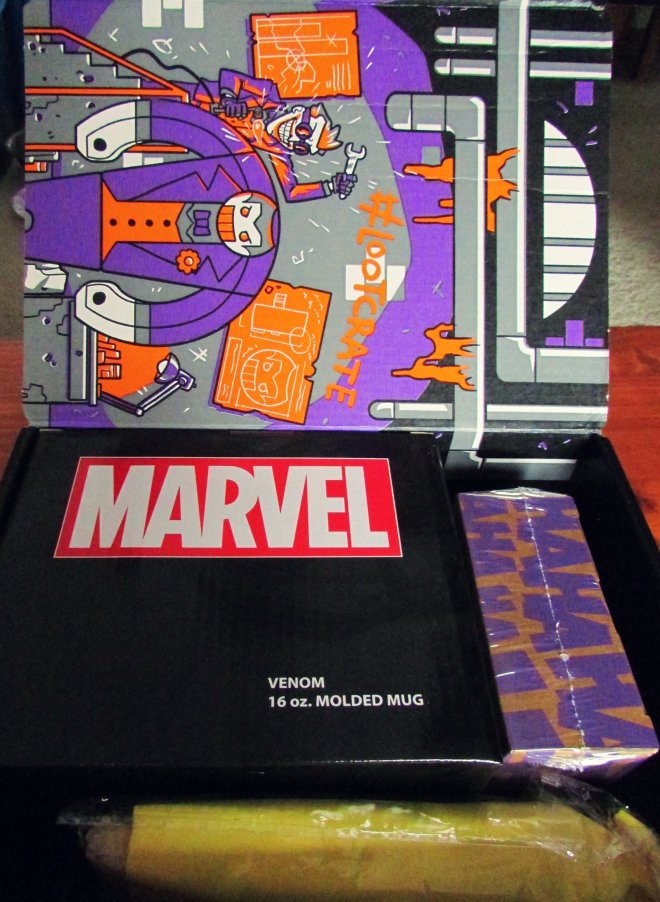 When I received last month’s Loot Crate, “Heroes II,” I had been low-key hoping that we’d also get a sequel to the company’s wildly entertaining “Villains” box, too. I mean- why should the good guys have all the fun, right?

Well, Loot Crate apparently read my mind (kind of freaky) because August’s box was just that- another assortment of items dedicated to the baddies we all know and love across comics and television. “Villains II,” Loot Crate’s second sequel-esque collection, took a slightly different approach to boxes in the past. While the typical crate contains multiple smaller items, toys, trinkets, the occasional t-shirt and Digital Loot (coupons and promos that can unlock additional online content)– August’s crate contained a handful of decently sized/valued items alongside the monthly mini-magazine and collector’s pin- and without any Digital Loot.

Let me show you what I got! 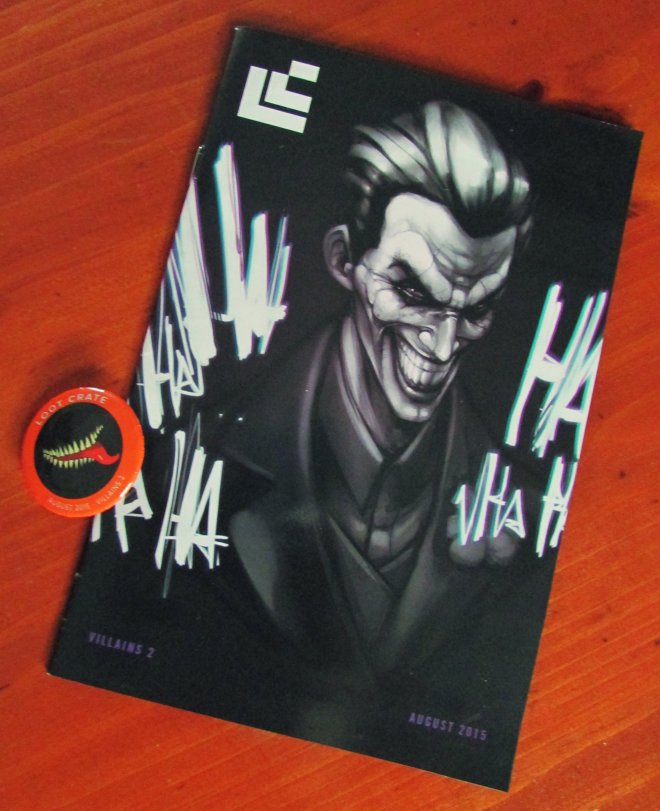 First up are the usual items- my monthly pin and mini-magazine. This month’s installment, packed with puzzles and promotional advertisements in lieu of any interviews and Q&As- also included a a fun little analysis of Batman’s greatest foes and the type of person that fits their personalities in the real world (i.e.: The Scarecrow’s IRL-version is that one person we all know who seeks out the worst stories happening in the world and endlessly plasters them all over social media in order to scare people.)

It’s a fun read- and even more fun when you try to think of the people in your life who fit the profile of each villain (I’m a Poison Ivy personality for sure.) 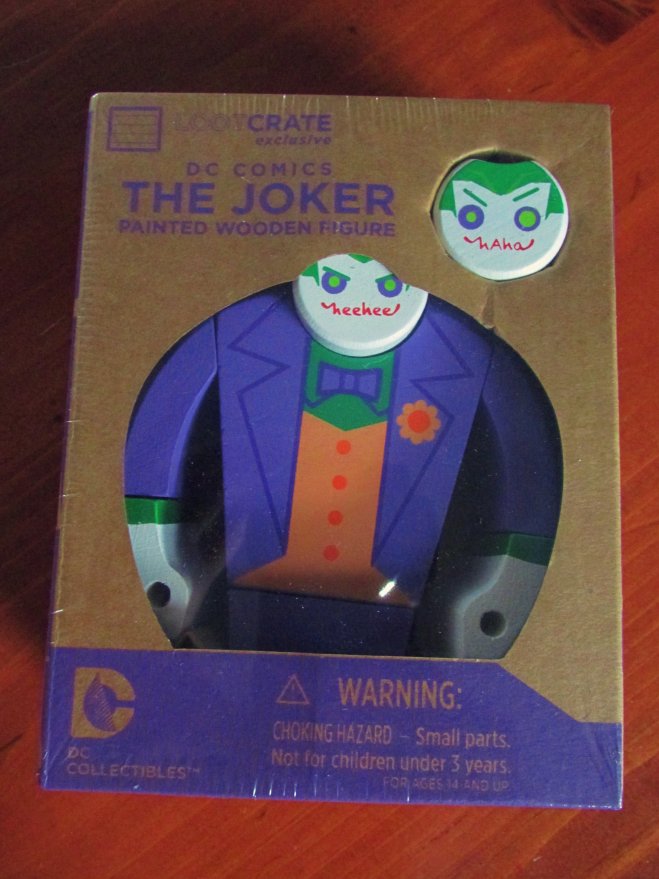 Speaking of Batman, the first item in the box that I happened to glance at was this creepily-cute wooden Joker figurine with interchangeable faces. It’s so unique from any other (typically plastic) figurines I’ve received in past Loot Crates- and since I’m STILL pretty pumped up from the official “Suicide Squad” trailer and a glimpse at Jared Leto’s version of The Joker- I think I’ll be keeping this one for myself and finding a special spot for it on one of my shelves. The more I look at it, the more adorable it is to me- so maybe I’m more of a Harley Quinn personality than a Poison Ivy one, after all.

I was so, so, SO happy when I saw the HYDRA logo inside of August’s crate. By far my favorite (and the most diabolical) villains of all- I was ecstatic that they weren’t left out of the mix this time around. This silver pin, which has already found a home clipped onto my leather jacket for the Fall- was the highlight of this month’s box. I love it and I can’t wait to show it off- probably while getting emotional as I talk about my Bucky Barnes/Winter Soldier feelings and how excited I am for “CA3: Civil War” to be released.

In August’s POPSUGAR Must-Have Box, I had received a very cute and very classic-looking coffee mug to replace a broken one in my office. I admit that when I first opened this Venom one, complete with a freakishly long tongue and frightening looking teeth- I wanted to bring it to my office, too (I’m sure my boss would get a kick out of it while I sipped from it and met with clients)– but I think this is best reserved for home on those mornings when I’m able to brew coffee in my kitchen before I get going for the day and don’t have to worry about scaring people with the mug. 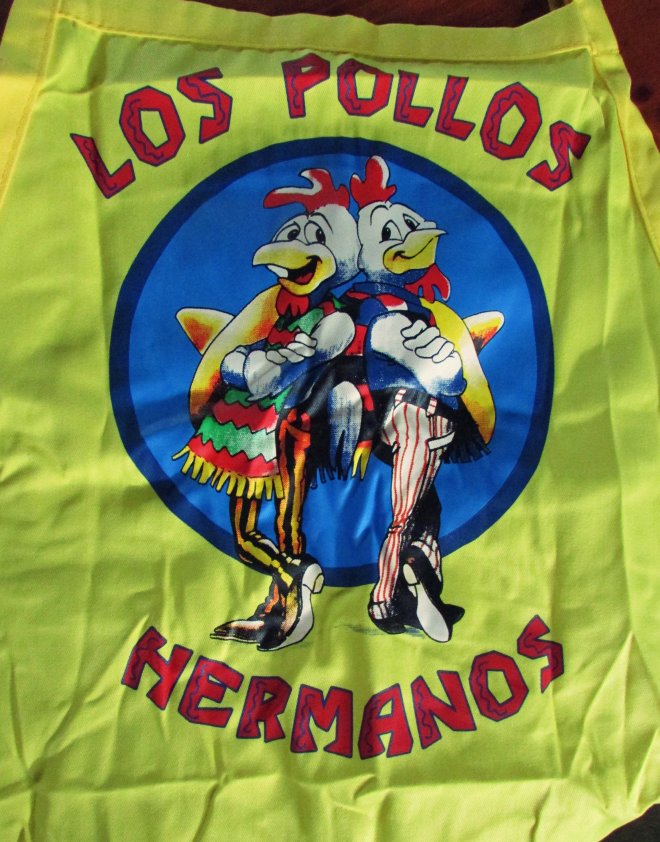 Finally, what is a Villain-themed crate without something inside that references the multiple not-so-nice folks/threats in ‘Breaking Bad’? This machine-washable apron, sporting the fictional Los Pollos Hermanos logo, absolutely cracked me up- and will probably get more use out of any of the t-shirts I’ve ever received through Loot Crate (not that I don’t love them- but I am really excited to wear this the next time I do any cooking/baking posts for the blog!)

This item was really unexpected and I think it’s fantastic!

Overall, I loved August’s crate. Each item was unique and fun- and I’m going to be a little selfish this month and keep all of them for myself. I really hope that this isn’t the last ‘Villains’ box we see from Loot Crate. I know it’s hard to top a successful sequel (and even harder to top the original again,) but I’d like to see a part III to this series.

September’s box was recently revealed to have the theme ‘SUMMON’, which sounds interesting enough. I can’t wait to see what’s inside!