Good afternoon and Happy (belated) Valentine’s Day (and belated Galentine’s Day to all my fellow fabulous females out there!) It should come no surprise at this point, but yesterday saw another snowstorm hit New England. As a result, today is seeing another city-wide shut-down in effect while emergency crews attempt to clear roadways and side streets for what feels like the hundredth time in the past few weeks. The silver lining in the aftermath of this most recent storm- the sun is out right now!- is unfortunately overshadowed by the fact that there are 45 MPH winds whipping violently outside, causing the (current) “Feels Like” temperature to be a staggering -17°F.

Maybe it’s just because I’m finally starting to crack under longstanding cabin fever (I’ve been mostly confined to only two locations- my home and my office- within the past week,) but the non-stop snow, the frigid temperatures- the undeniable inconvenience these storms have caused so many- is starting to become less depressing and more comical, really. If anything, the resulting memes and funny photos I’ve been seeing posted and shared on social media in recent days have helped keep my spirits up. You can say a lot about New Englanders (and specifically, Bostonians-) we’re not the most levelheaded and cautious of drivers, for example- or our sports teams take priority over nearly everything else going on in the world, and our accents are cause for numerous parodies- but at least we have good senses of humor about things. 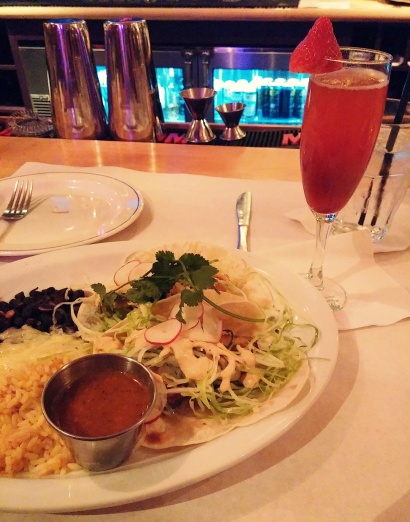 Prior to the storm, I did manage to venture out on Friday night to slip and slide on the iced over sidewalks and have dinner and a couple of drinks with my dear friend Evan at Beat Hotel in Harvard Square. Nothing warms me up more than live jazz bands and amazing food (I highly recommend the Mahi Mahi fish tacos!) so it was a nice way to break up the routine I’ve fallen into as of late. If you’re ever in Cambridge and looking for a great meal in a lovely setting with phenomenal live music- the Beat Hotel is your place.

The only regrettable part to last night’s storm- for me, anyway- is that it caused me to miss the evening’s events at StyleWeek Northeast due to unsafe driving conditions. I had been looking forward to seeing the latest designs from Angelica Timas and Shalyn Webber, among others- but I’m hoping I’ll be able to catch another event soon once Mother Nature decides to show us a little bit of mercy.

In somewhat fashion related, but mostly blog-centric news- at the end of January I had mentioned in my “In a Nutshell” post that I had hoped to start sharing some of my favorite pieces and ensembles again beginning this month (it’s been forever and a day since I’ve made a “Closet Crushes” post!) and I still have every intention of doing it- but the very idea of standing outdoors and attempting to pose with the wind howling outside the way it is right now is enough to make me shiver where I sit and pull my blankets around me a little tighter. I’m really going to try to pull a couple of posts off within the next week or so!

Until then, I’ll be having another long, hot soak in the tub this evening in preparation for tonight’s “The Walking Dinner,” where I prepare a meal to munch on while the new episode of “The Walking Dead” airs. Here’s hoping the power doesn’t go out!

Stay warm out there, everyone!

3 thoughts on “The Cabin Fever Chronicles”