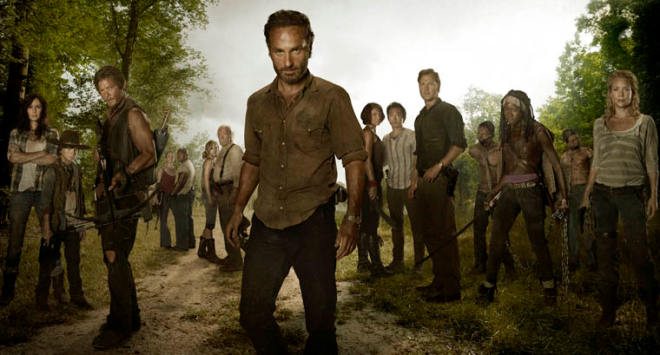 As most people can probably guess, either from knowing or meeting me in person, or from even skimming this blog, I’m such an avid long-time fan of “The Walking Dead”. Every Sunday night that this show is on, it’s like an event- something to be prepared for. It’s gripping, it’s gory, it’s often infuriating, and sometimes even heartbreaking (especially with scores from the show’s composer, the brilliant Bear McCreary, playing in the background) and when it’s over, you’re left wanting, no, NEEDING, more. It’s like a zombie-filled television version of crack-cocaine- and I need to check myself into rehab for it.

I remember seeing the advertisements for the series premiere (which took place on Halloween night, of course) back in 2010, during AMC’s annual “FearFest”. At the time, I had only heard about the comic books and novels in passing from friends and acquaintances, and wasn’t quite sure what to expect- but I was intrigued, so I tuned in to watch it, and was immediately captivated by the story- and have been ever since. In nearly three years, I have yet to miss an episode, and thanks to other helpful die-hard fans, I’m nearly caught up on the comics.

It should also be said that I also love the hell out of other “Walking Dead” fans, too. So many passionate people with such spot-on senses of humor when it came to picking out characters’ flaws and poor logic in post-apocalyptic situations, or just making light of certain story lines all together. I’ve met and corresponded with some brilliant, hysterically funny, and just generally great people because of this show, which makes it even more fun to get into.

This past Sunday wrapped up the frenzied and bloody third season, and I wanted to share my thoughts (and probably some .gifs from Tumblr, naturally.)

*PLEASE BE WARNED: THERE ARE HEAVY SPOILERS AFTER THE CUT. Please don’t read if you’re not caught up or don’t want to know how the season ends!*

Season 3 started with a bang, but ended, in my opinion, with little more then a fizzle. That’s not to say I didn’t enjoy the finale, because there were many aspects of the episode I DID like, but I was a little underwhelmed with the final character death (I’ll get to that in a bit) and the way things were packaged for season 4. I suppose it’s hard to top the season 2 finale- since we were not only teased with the first appearance of Michonne, but the prison, too. Such a fantastic cliffhanger must have spoiled me.

While we weren’t exactly at a shortage of grizzly walker and character deaths this season, it was the new additions that truly impressed me. David Morrissey, who I vividly remember being semi-traumatic in the poorly executed biblical thriller “The Reaping” a few years ago, blew me away as a handsomer, more charismatic- but just as evil and unhinged- version of the all-time villain, The Governor, and Danai Gurira, who in my opinion is one of the most beautiful women to ever walk the Earth, was the perfect casting choice for the no-nonsense ninja assassin, Michonne. It’s just impossible not to love her and her sword-wielding, and when she eventually becomes integrated as an important member of the group, all you can do is just hope she makes it to the very end. 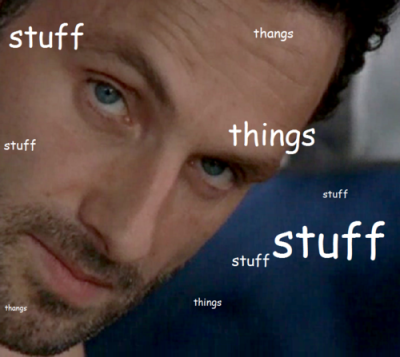 Even the new characters who haven’t gotten much screen time (yet) were welcomed additions. The logical, rational, “nice guy on the wrong side” Tyreese (played by Chad L. Coleman) and his sister Sasha (Sonequa Martin-Green) were interesting to watch as they were first kicked out of the prison by Rick after he had a mental breakdown, found themselves at Woodbury, and then promptly came back to the prison to help Rick & Co. after The Governor went from unhinged to “dangerously batshit” over the course of three or four episodes. They’ll undoubtedly play a big role in season 4, and might serve as the moral compasses of sorts now that Dale is gone.

We even got two M.I.A. characters from season 1 back- albeit for a limited time. Michael Rooker’s return as the loathsome, one-handed Merle Dixon, although expected- was still fun as hell, if not nail bitingly tense, considering his long-anticipated reunion with his baby brother Daryl involved them fist-fighting each other while surrounded by walkers and screaming Woodbury whackjobs. We also caught up with Morgan (Lennie James), Rick’s savior in the very first episode of season 1 after he awoke from his coma in the hospital and tried to go home to find his family. The episode, “Clear” was the best of the season- and absolutely heartbreaking. In the wake of his son, Duane’s, death, Morgan has survived on his own, and has understandably lost touch with reality in his broken state. Although he has a few moments of clarity, they are fleeting, and Rick’s realization that nobody can survive all alone like that, including him, should win every award.

Of course, as I said, there were a ton of character deaths this season- some more depressing than others, and some, long overdue. While The Governor escaped in Sunday’s season finale, setting the tone that he will be a reoccurring pain in the balls come season 4- he left in his path of destruction the bodies of a bunch of nameless, anonymous Woodbury residents, who, realizing he’s lost his damned mind- call him out on it and are promptly shot down. Milton, his socially awkward scientist/best friend/henchman, is also killed, left to turn into a walker and finish off Andrea as the final kill and big “shocker” to season 3. I know Andrea’s death was supposed to be tragic or poignant or whatever, but I couldn’t have cared less. You can’t have a female “heroine”, if you can even call her that, be so poorly written and so grating, go on and survive for nearly three seasons- making awful choices, being generally horrible to her friends and the people that care about her (Michonne, Dale, pretty much everyone in Rick’s camp), and then FINALLY kill her off and expect me to give a shit just because she “tried” to help everyone. Good riddance. Let’s move on.

Speaking of characters overstaying their welcome: Lori’s death via cesarean early on this season was more of a relief than anything else. Terrible wife. Terrible mother. Indecisive. Hypocritical  Her final speech to Carl, while sweet, somewhat redeeming to an extent, and echoing her own regrets with her poor decisions, would have been a lot more powerful if Carl had taken them into consideration instead of going on to do more pain in the ass things. She also went on to haunt Rick for the rest of the season in a series of hallucinations, which, while not exactly her fault (what with being dead and everything), was still annoying with the exception of one or two appearances. Float away, damn it. Float away.

I’d say the most gut-wrenching death this season had to go to either T-Dog, who made it through the first two seasons relatively unscathed and STILL wasn’t given a back-story until after his death, where he gave his life to save Carol, or to Merle- because he died trying to redeem himself, and to protect Daryl, and ultimately it was his little brother who had to tearfully put him out of his walker misery. Say whatever you want about Norman Reedus’ cry-face- but that scene was so, so sad.

The character deaths, and births (Judith Grimes, AKA ‘Lil Asskicker!) aside, this season was fast paced: drama in the prison, drama in Woodbury, even more drama when the prison and Woodbury collided in a more than hostile way for a variety of reasons- and things stayed tense and nerve-racking up until the season finale. One would think that with so much action, there wouldn’t be room for character development- not like there was in season 2- but there was. While season 2 undoubtedly belonged to Daryl as he went from temperamental hillbilly trapped in his brother’s shadow to actually decent, compassionate guy, and Shane- who went from decent guy to shady asshole to downright nuts- season 3 were owned by Carl and Carol.

Carl may still be a moody little shit- but he gets a free pass since he not only had to shoot his dad’s best friend, who was a father figure to him in the last season, but then also had to shoot his mother in the head this season after she died during childbirth. That takes balls- and Carl has them. He just needs to stop talking back and behave himself. And Carol, who started off the series as a broken, battered, timid and unsure wife-turned-widow, who lost her daughter in a horrific way last year- blossomed into a confident, strong, humorous and capable woman who earned fans’ respect and devotion. Get it, girl.

When the dust settled after Andrea’s death on Sunday, the season wrapped up with Rick, Daryl, Michonne, Tyreese, and Sasha bringing back Woodbury’s elderly, their sick, and their children- to live in the prison after The Governor’s ruthless execution of his own soldiers and consequential bailing on whoever was left in his community, making me wonder how useful they’ll be when he inevitably comes back to get his revenge and kill the prison’s remaining inhabitants.

It’s clear to see why Rick did it, though- to save Carl’s humanity after seeing how cold and detached his son, and even himself, were starting to turn in the face of threat and danger. Ultimately- that’s what the show is about- people trying to survive and keep their humanity after the world goes to Hell, so I can appreciate the subtle nod to that as the episode faded out.

I just hope it doesn’t slow down season 4- because apart from the humane side of the show, it’s also about killin’ walkers.

And in conclusion, here’s a .gif of Daryl holding Lil’ Asskicker for your ovary-exploding pleasure: