Getting my Mexican food and margarita on at my ‘Dirty Thirty’ birthday party last night!

My goodness! How on Earth have we reached the end of January already? It feels like just yesterday I was kicking off 2016 in Newport- and now here I am- preparing for February and recovering from my belated ‘Dirty Thirty’ birthday celebration my friends had for me last night with dinner and drinks at Papagayo in Somerville, followed by a screening of ‘The Boy’ at the theater around the corner (and it would have been last weekend, if not for Mother Nature gifting me with a lovely little blizzard like she does every year around this time!)

January was a whirlwind- and I attribute it feeling like it came and went in the blink of an eye to my being very busy most days- which is a good thing! I finally got into the groove of my new job (and am liking it very much so far!), began my usual beginning-of-the-year-cleanse-and-detox-program by vigorous cleaning, organizing, and healthy eating/exercise- and celebrated an influx of friends’ birthdays- including my own. It really is the Age of Aquarius right now!

Yes, indeed- I hit the milestone of turning 30 just a couple of short weeks ago- and I’m still getting used to answering “thirty” whenever anyone asks me how old I am- although it usually sounds more like “twenty-ni-oh, wait” at first (and God bless every single person who has seemed/pretended to seem genuinely surprised when I tell them my age in recent days.) Although I’m new to this whole post-twenties thing- I have to say it’s looking pretty fun and very promising so far!

January, of course, was not without it’s shocking and even sad moments (even the best of months have them!) My uncle, who has been on/off ill for a few weeks now- recently learned the reason behind his bouts of fatigue and nausea and is scheduled for a quadruple bypass tomorrow to fix a couple of tricky arteries in his heart. I’m visiting him a little later on today- but my whole family has been worried sick about it leading up to the procedure and have been trying to surround ourselves and immerse our minds in good thoughts and positive vibes.

Pop culture took a series of blows this past month when the world lost David Bowie, Alan Rickman, Eagles’ member Glenn Frey, and most recently, ‘The Godfather’s Abe Vigoda (“Tell Michael it was only business. I always liked him.”) – in quick succession. 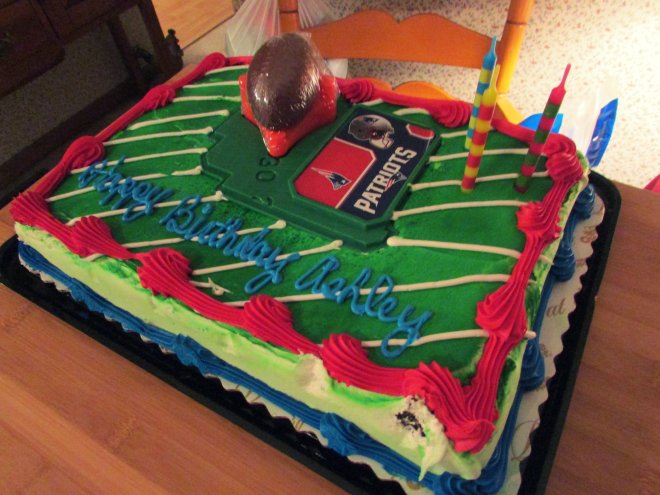 In the spirit of things- my mother also had a Patriots-themed birthday cake made for me as a surprise.

New England Patriots fans took a blow when Brady & The Boys couldn’t quite clinch the AFC championship and a slot in Super Bowl 50 in last week’s nail-biter of a close game against the Denver Broncos (I swear, those final minutes aged me forty years.) The loss also marks my own losing of a high stakes bet made with a friend of mine in California who I got a little cocky and competitive with- and now we’re in the process of ironing out the details of my having to pay up in the form of a cross-country visit sometime within the next couple of months where I will undoubtedly be picking up a hefty bar tab after a night out…

… Although would it still be considered “losing” the bet when I adore San Diego so much and don’t mind being there at all? I don’t think so!

Anyway- what’s in store for February? Apart from working as usual- a trip to NYC, for starters? How about a couple of really fun collaborations I’m excited to share? Maybe a few recipe posts? And of course we can’t forget the return of ‘The Walking Dead’- which is set to make my Valentine’s Day even more romantic once Daryl Dixon is gracing my television screen again!

All in all, January was a very, very fun month- the perfect way to begin 2016- and I’m excited for the coming weeks!