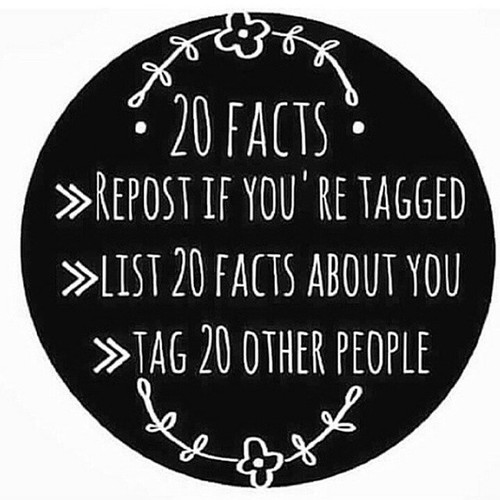 Back on Halloween, prior to running off to NYC, I had mentioned that November was “crunch time” at my job, and I wasn’t exaggerating. The past couple of weeks have been spent putting in some serious overtime at my office as I pored over paperwork, files, e-mails, and post-it notes (a necessity in any busy girl’s work space!) In between long hours, I also entertained company visiting from out of town for a weekend, enjoyed the first dusting of snow of the season, and have been putting together content for the blog. Now, with the weekend here to- hopefully- get caught up on those pesky e-mails I’ve been neglecting and the multiple shows recorded on my DVR, I’m also taking the time to participate in the ’20 Facts Tag,’ which should be self-explanatory. The lovely Nikki over at Dollar Store Diva tagged me, as well as some other phenomenal Boston-based bloggers. Thanks, Nikki!

Here are mine! I tried to keep some of them Boston-area related given that so many wonderful women in the city are also participating, but there’s a few odds and ends in there, too!

1. I think Charlestown is my favorite neighborhood in Boston. I’ll always love Beacon Hill and the North End, of course (and Southie will forever hold a special place in my heart-) but in the warmer weather- I love walking around Charlestown. Especially around the Bunker Hill Monument. It’s beautiful. You won’t find parking to save your life, but strolling around the area is really enjoyable.

2. Assaggio is my favorite restaurant in the city (located in the North End.) I was just there this past weekend, but if my date and I hadn’t been able to get a reservation- we probably would have headed over to Wagamama in Faneuil Hall. There’s only a couple in the United States, and they’re all located in the Boston area. Before Assaggio and Wagamama won me over, there was The Other Side in Back Bay, which is now sadly closed (RIP.)

3. Favorite Boston-based movie? I feel like the first “Boondock Saints” is a given, but it’s right up there with “Southie” starring Donnie Wahlberg. That movie is my guilty pleasure. It’s so bad, so 90’s, that it’s fantastic. I could quote Rose McGowan’s awful accent from that movie all day every day- and Will Arnett! Can we talk about Will Arnett in that movie?

4. My first concert experience was when I was 14/15, and my older brother convinced me to attend an all-ages Insane Clown Posse show with him at this terrible little club in my hometown on a Friday night in the middle of December. He painted my face and everything (which would later result in some pretty horrific breakouts on my delicate teenage cheeks and forehead.) The show was, as expected- an absolute nightmare of out-of-control fans and shitty rapping/shouting on a shoddy sound system- and I vividly remember getting Faygo soda sprayed in my general direction. Looking back, it’s more funny than traumatic, though- which I guess is a good thing.

5. I (thankfully) don’t have any serious allergies- be it bee stings or peanuts- but I DO tend to break out in a minor case of hives if I eat the small pretzels typically found in trail mix. I don’t know if it’s a preservative or the type of sodium used to keep them crisp or whatever- but I’ve learned the hard way on more than one occasion that I need to avoid them (thanks, pretzel M&Ms.)

6. The first album I ever bought with my own money was the CD-copy of No Doubt’s ‘Tragic Kingdom’ which remains one of my favorite and most cherished purchases of all time. I used up a good chunk of my baby-sitting money to get it. Gwen Stefani was, and will always be, a flawless queen.

7. In completely insane and not-at-all-well-thought-out facts: I once went cliff jumping/quarry diving when I was a teenager. I’m lucky I didn’t break my neck or drown in the process, but nothing will ever top the look on my friend’s face as he tried to explain to me how to properly hit the water to better avoid serious injury and me sprinting past him and just going for it while he was mid-sentence.

8. I alternate between sleeping on my side and my stomach, although regardless of how I end up dozing off- I always wake up bundled up in my blankets like a tightly wrapped burrito.

9. I’m currently addicted to the new chestnut praline latte at Starbucks. It sounds revolting, I know- but you can never judge a coffee by it’s cover. I’ve been pleasantly surprised with this one- ordering venti sized cups to get me through the mornings at work. They’re sweet, with just a hint of nut-flavor, but so, so good.

10. I’m an avid candle collector/user. At any given time, I have two or three burning around my place to give each room it’s own unique, lovely, but still carefully coordinated scent. Right now I’m finishing up a hazelnut one before I launch into the holiday fragrances (bring on “Christmas Cookie!”)

11. I love to walk pretty much everywhere, and really only prefer driving if I have to go any great distance to get somewhere. It’s good exercise, it helps clear the mind, and with the right music in my earbuds- I feel like I’m working a catwalk during Fashion Week.

12. I’ve had a Fourth Generation green iPod Nano that I named Kermit for the better part of six or seven years. It still works like a charm, and I’ll be sad whenever the battery inevitably burns out once and for all- but it still cracks me up whenever I take it out of my bag and see someone with a shiny new iPhone looking at it like it’s some sort of rare fossil from prehistoric times.

13. One of my long-term life goals is to release a book of my urban exploration photography and research from over the years, especially with so many of the places I’ve shot in the past set to be, if they haven’t already been, condemned and/or torn down. Even if people just used it as a coffee table book, I’d still be thrilled that my work was out there in the world- just waiting to be looked over by anyone who appreciates abandoned architecture as much as I do.

14. Back in middle school, a group of kids in my class made up and perfected a new language that completely confused the adults but was perfectly understandable among our peers who learned it. Almost twenty years later and I can still speak it fluently- and do so every once in a while with my best friend Sean- who also remembers it. Ask me to recall anything I learned in my high school Spanish classes? I’ll just stare blankly at you.

15. The last book I purchased (and will be reading shortly,) is “The Romanov Sisters: The Lost Lives of the Daughters of Nicholas and Alexandra” by Helen Rappaport. I’ve always had an unexplained fascination with the Romanov family, especially the Grand Duchesses. I recently and randomly stumbled upon the book while looking for a gift for a friend and snatched it up. I’m hoping to start it by this weekend.

16. Another long-term life goals of mine is to buy a house in Ocean Beach, San Diego- my favorite part of the city and also the most laid-back and relaxed. Everything is within walking distance of the ocean, there’s so many shops, bars, and restaurants along the boardwalk, everyone is ridiculously nice- and downtown is only a short drive away!

17. Although I love music and have a few wonderful, talented friends who actively perform in bands- I am instrumentally challenged. I can’t play anything. Not well, at least- and my musical prowess pretty much begins and ends with the tambourine. My father was an incredible drummer and both of my brothers were/are skilled guitar players- but that musical gene seems to have been lost on me.

18. My first kiss was in the second grade when this little boy in my class, Richie, asked me if I’d play his wife in a musical he was writing and wanted to perform for our entire grade. I foolishly bought into his plot, and before I knew it- he’d smooched me during “rehearsal” at recess. Richie, wherever you are- you were a sneaky little bastard.

19. Back to Boston-related facts as I wrap this list up- my favorite tourist-y attraction that I would highly recommend to anyone visiting the area for the first time is the Museum of Fine Arts. I go there sometimes, even when they don’t have an exhibit that I find particularly interesting- just to relax. It’s nice to walk through the museum and is a great way to spend a rainy Saturday afternoon. It beats walking the Freedom Trail, for sure!

20. And lastly, my favorite music venue in Boston is the Paradise Rock Club. I’ve seen so many incredible shows there. It’s small, intimate, and the sound is (usually- depending on the band) incredible. I have a lot of fond memories of nights spent at the ‘Dise!

And there you have it, 20 (some Boston-based) facts about yours truly! Now, I’m supposed to tag twenty other Bloggers- but I feel horrible putting anyone on the spot like this- so I’m tagging anyone that wants to participate! If you have twenty facts about yourself that you’re just itching to share, feel free to do so and link me to the post so I can read all about you!

Thanks again for including me, Nikki!

It's January 22nd on the East Coast which means it's my birthday, and if you'd had asked me in my twenties what I'd be like in my thirties, I probably would have said "will I live to see my thirties?" But here I am- healthy, successful, writing my own rules, surprisingly still optimistic and much, much smarter and more confident than I was ten years ago. . I used to be weary of getting older, and dreaded it- like age would somehow diminish my value or appeal- but with every year that passes the more powerful, self-assured and no-nonsense I become. It's refreshing to finally be comfortable in your own skin. . I'm a fine wine over here. Salud. 🍷. . #Selfie #Me #HappyBirthdayToMe #Birthday #BlackAndWhitePhotos #BirthdayGirl #Aging #GoodNight
I'm playing with Pantone's color of the year ("Classic Blue") and trying out these sunglasses which are supposed to improve your mood. We'll see how it goes. 🕶💙. . #Selfie #Me #Styled #Fashion #FashionBlogger #FashionBlogging #ClassicBlue #ClassicBlue2020 #RainbiwOPTX
Today on the blog I've got a recipe for birthday cake petit fours. Mini cakes for everyone. 🎂. . #Foodie #Recipes #Food #FoodPorn #Baking #Cooking #Desserts #Cake #PetitFours #Blogger #Blogging #IronChefAshley #BeatBobbyFlay
Onesie pajamas, but make them controversial. . #Selfie #Me #GoodNight #HappySunday #Weekend #Pajamas #Winter