I was embarrassing levels of giddy when my February Loot Crate showed up a few days earlier than the expected arrival date this week. I had so much fun with my January one (as did some of my friends who I passed a few of the goods along to,) that I couldn’t wait to see what came in this month’s- especially after I learned the February box not only had a “Warriors” theme, but that Loot Crate had teamed up with Frederator Studios (the minds behind “Adventure Time,” “Bravest Warriors,” and “The Fairly OddParents,” among others,) for it.

Here’s what I got:

February’s booklet, like January’s, featured games, subscriber-submitted photos, a breakdown of what was in the box, Q&A’s, and articles. In this month’s, subscribers were given a summary of Frederator’s interesting history and current projects, as well as a voucher for a free “Bravest Warriors” digital comic and a “Bravest Warriors” sticker. Although my niece may be a little too young to get into the BW stuff (she’s not quite six years old, after all,) I’m sure she’ll love the bee sticker and will find a nice place for it.

In a cute nod to Valentine’s Day, enclosed in this month’s crate was an “anytime” greeting card from OpenMe with a fun twist. I think this may be the thing that gets used the quickest, since I have more than one bacon-aficionado friend I’d pen a little note to inside this card just to remind them how much I care when they’re having a bad day.

Inside the card was a little slip of paper reminding me that the cartoon heart made out of bacon on the front is, in fact, not edible. Well played, Loot Crate. 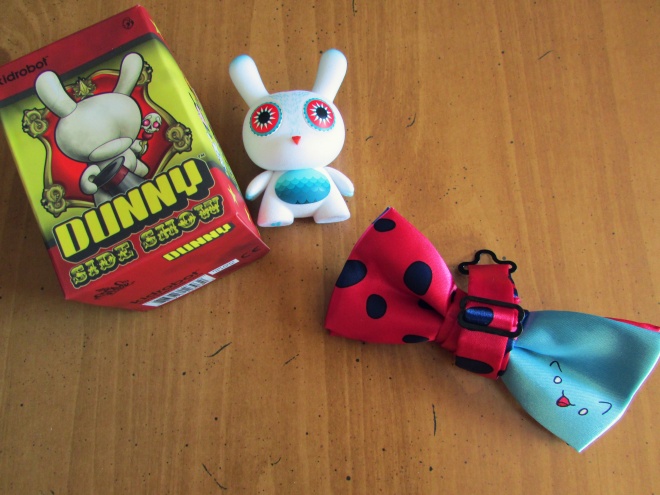 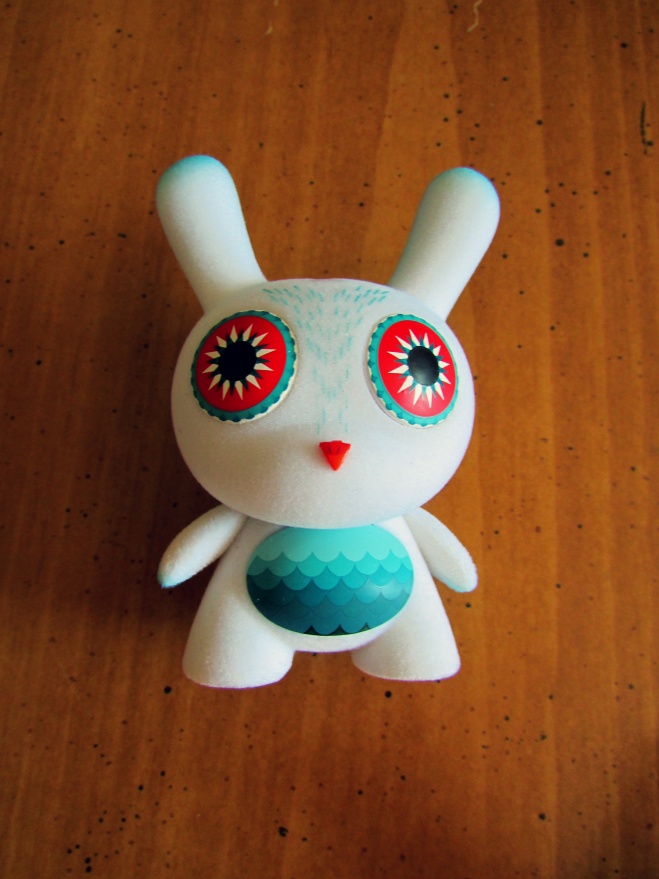 I couldn’t stop laughing when I opened the Dunny Sideshow box and saw this fuzzy little rabbit with Bob Costas’ eyes staring back at me. I don’t think I really have a place for such a “so creepy it’s cute” figurine, but much like the “Bravest Warriors” sticker I received, I think my niece would get a kick out of this.

Also, I think I’ve only ever worn a bow tie once in my life, but I am giving some serious consideration to piecing together an outfit just so I can wear this adorable Catbug (another “Bravest Warriors” character) bow tie at least once in my life. Both prints on either side of the bow tie would go with so many things I own. I’ll have to see what I can come up with.

I will never say no to a good graphic tee, and I especially loved this soft, over-sized “Alpha Battle” t-shirt that featured cute depictions of iconic video game characters preparing to duke it out on the front. This is one I’ll definitely be keeping for myself and adding to my collection of quirky t-shirts. It’s fantastic.

And yes- I’ll iron it before I wear it.

I’ll also never say no to a good travel/gym bag. The last item in February’s Loot Crate, one more from “Bravest Warriors,” was a decent sized and durable cinch bag that will do nicely when I need to lug around some extra clothes when I go to work out or as a carry on for when I’m hitting the road for a few days.

Overall, February’s Loot Crate was another tremendously fun un-boxing. While I had a lot of stuff I was giving away to family and friends from my January one, I’m keeping most of what I received this month. I can’t wait for March’s!