The first time I ever visited Southern California, specifically San Diego, it was 2007, I was in my very early twenties, and I had gone to visit friends who were both performing, and working, at an all-day, outdoor music festival. I made a weekend out of it, sticking around an extra few days to take a look around and spend time with said friends who lived in the area. It didn’t take long for me to fall completely head over heels in love with the city and all it had to offer a wide-eyed, and (then) innocent girl like me. I wasn’t a jet-setting, world-weary traveler. At the time I’d barely gotten used to Boston, had taken NYC by storm a couple of times, and had even traveled to London, England the previous Summer for what will forever be known as the “Dynamic Duo Tour de Force”, as my best friend Samantha had come with me for the sight-seeing and the Reading/Leeds Festival experience- but I knew San Diego was different from anywhere I’d been before. I could feel it almost immediately.

Not only is the weather perfect nearly year-round, making outdoor activities and exercise all the more fun, but the scenery is picturesque, the nightlife options- bars and restaurants- are so diverse and easily accessible for whatever mood you’re in, and the San Diego music and art scene, in my opinion, is one of the best in the country.

Six years and countless trips later, I’m not as wide-eyed (and definitely not as innocent) as I used to be, but I’m just as enamored with San Diego as I was the very first time I visited- maybe even more so now that a good chunk of my dearest friends and family have moved there, and in surrounding areas, over time. Some visits have been great, others not so much, for different reasons, but I always go back because I feel so “at home” there. People I know, friends, family, new and old alike- have told me on more than one occasion that I belong there- that I need to make the move. 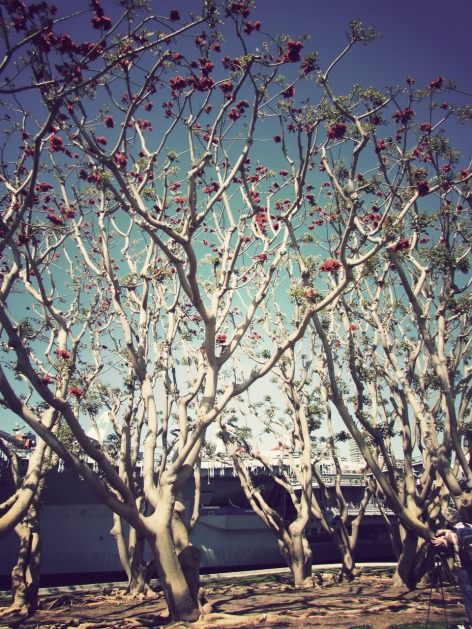 I had said in 2011 that I had every intention of moving out west, but as most of you know, and have probably experienced yourselves, life has a way of throwing curve balls when we least expect it. No sooner had I expressed my desire to leave New England when my father was diagnosed with cancer, and any and all plans to relocate immediately came to a grinding halt while I spent the next year at his side until his untimely death in the Summer of 2012. The idea was, obviously, put on the back-burner ever since- until now.

My father knew how much I wanted to move to San Diego, and he supported the decision (almost) 100%. Of course I was, and still am, his little girl- and the idea of me moving across the country to a place he hadn’t been in a long, long time- made him uneasy, but he wanted me to be happy, and as long as I flew back to Massachusetts from time to time, or found a suitable sofa for him to sleep on when he dropped by to check on me, probably unannounced knowing how my dad was- he had nothing but good luck and well wishes for me. I feel like holding myself back by not doing what I truly want to do, or going where my heart is telling me to go would make him so disappointed if he were still here- and I want so much to make him proud of me, wherever he is.

During my recent stay, I discussed the possibility of going through with the move with a couple of friends out there. They were so unbelievably eager, as well as helpful, with giving me advice and ideas of where to look for a safe, suitable place. One of my longtime friends, Duncan, even suggested we become roommates- which, if anyone knows Duncan- knows that it would be AWESOME.

Nothing is set in stone just yet, but I’m staying optimistic and positive that things will work themselves out in due time. I’m going to continue saving my money, planning, and preparing- and hopefully soon, I’ll be a permanent California girl, and not just a frequent visitor.