As has become a bit of a tradition for me since I started ‘Legally Redhead’, I’ve put aside some time to comb through all of my photos- ones I’ve taken myself throughout all of my adventures and ones that have been taken of me (some flattering, and some not so much)– over the course of this past year, and believe me when I say there were a LOT of them. So many, in fact- that narrowing down the photos to just ten to include in this list proved to be much more challenging than I’d been prepared for! I had an idea going into this post, sure- but once all of those photos were laid out in front of me- all of them filled with such wonderful memories, travels, and some with just plain silliness- my idea was thrown out the window and it was like starting from scratch!

I digress- After multiple edits, rearrangements, and more edits- I think I’ve formally and finally selected my favorite ten photographs from 2015! 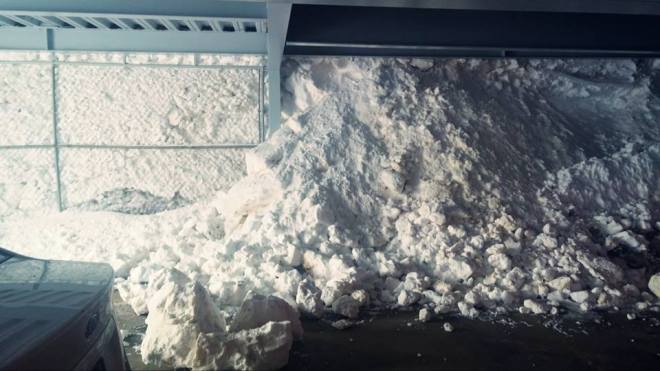 Some may be surprised that a photo from one of the worst winters imaginable (barely) made it onto the list, considering how miserable the non-stop blizzards made me, and the rest of New England- but this picture I captured on my cell phone from inside the parking garage at my last job after yet another storm shows just how serious things were starting to get when we began running out of places to put all of the snow. The back of my car, pictured in the bottom, left-hand corner- shows how close the buildup was getting to what was my designated parking spot at the time.

That pile wasn’t completely melted until late May/early June, by the way. 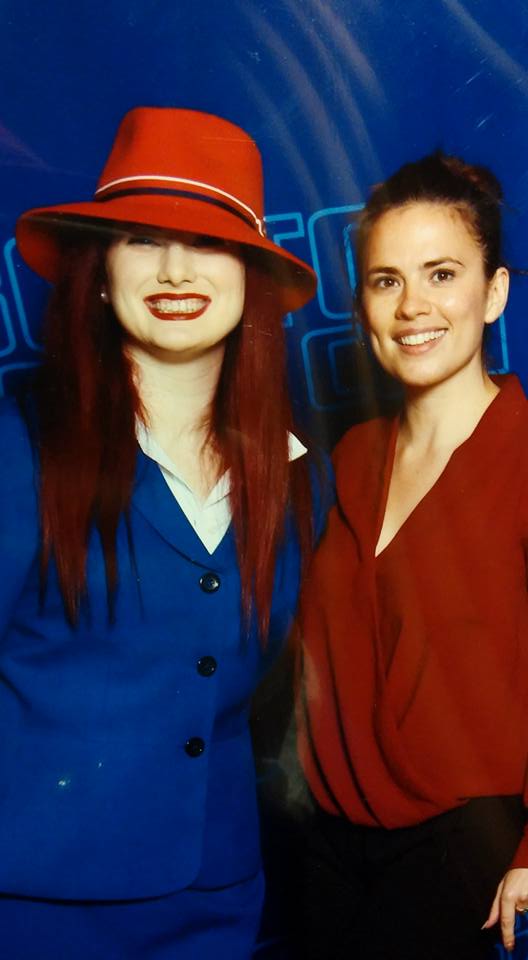 While the image quality might not be the best (it’s a photo of a glossy photo, after all-) the laminated copy of this picture snapped during this year’s Boston Comic-Con is proudly on display in my bedroom. While I simply didn’t have enough time to make multiple, elaborate costumes like I did for San Diego Comic-Con in 2014- the one costume I DID take the time and the effort to make, a homage to one of my favorite female Marvel heroes- was a gem in my cosplay résumé. When I got to wear my costume and pose next to Peggy Carter herself, Hayley Atwell- I was pretty much inwardly screeching with joy. When Hayley complimented the outfit- I couldn’t stop beaming- and that’s right around the time this photo, which definitely highlights my overjoyed megawatt grin and subsequent squinty eyes- was snapped by the hired photographer for the event.

Meeting Hayley was the cherry on top of a truly fantastic weekend I had that month. Not only did my longtime friend Steven attend the convention with me (and we saw ‘Ant-Man’ that night!) but it was also the day before Brandon Flowers’ incredible performance at House of Blues. 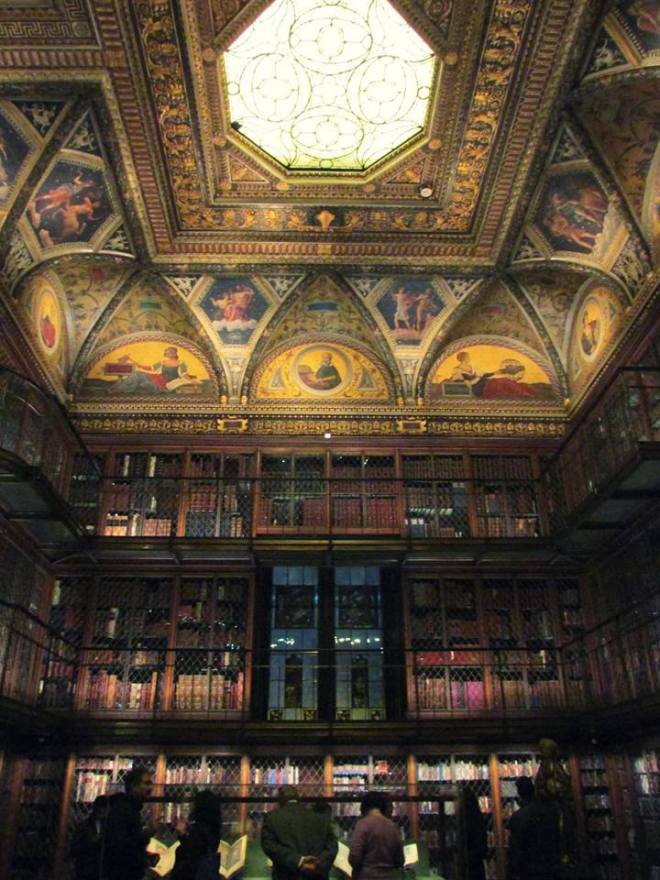 In the first of many day/weekend trips to NYC my friends and I took in 2015- January 18th saw me catch a train to Manhattan all on my own specifically to spend a couple of hours perusing and relaxing in The Morgan Library and Museum on Madison Avenue. While it was a tad difficult to get a perfect shot without other visitors looking and looming around in the background- I always liked this one the best. I thought it captured just how gigantic the library really is- and the stunning artwork that brightens up the ceiling (that feels like it’s a three miles high.)

The visit to the museum was absolutely worth the train ride- and the gigantic bruise I sustained on my hip after I fell on ice shortly after my arrival in the city earlier that afternoon. 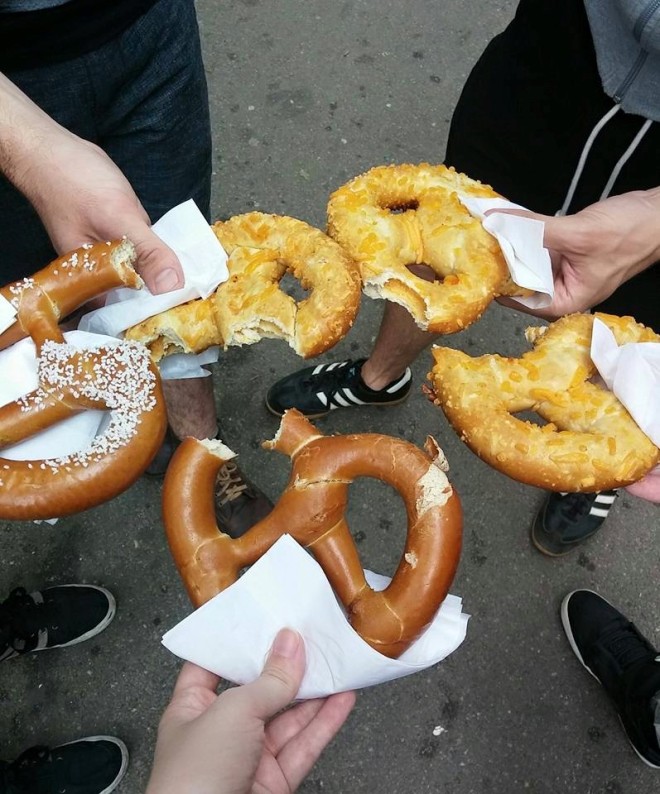 During another day trip to NYC, this time during the Summer and with a group of some of my best guy friends- what was going to be a quick visit proved to be a nearly 24 hour walking tour of the city (we only took the subway back to Grand Central Station when we reached Brooklyn and literally couldn’t move our legs anymore.) The trip was with- and for- our friend, Nick- who had never visited NYC before. We were determined to show him as many tourist attractions as we could (and I thought we did a pretty good job!) but I snapped this photo with my phone in the middle of the afternoon when our group stopped to take a break in Central Park. It wasn’t until we’d all taken a bite when I realized that we’d all ordered some variation of a cart pretzel- which are really the best.

I was going to omit food photos this year (because I did a lot of really tasty baking and thought ten photos of my kitchen concoctions might be a bit much for one post)– but this one was too good to pass up. 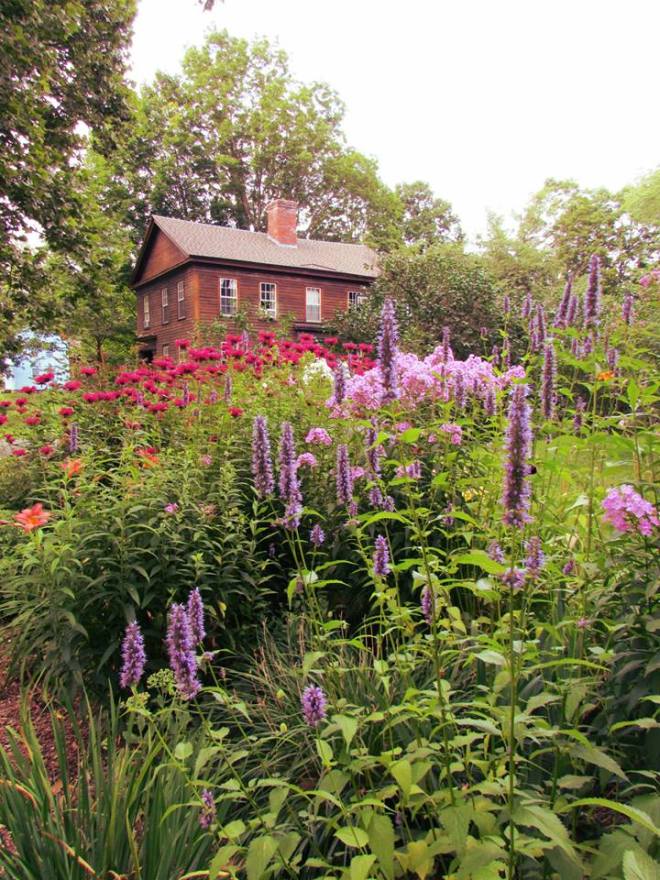 2015 was the year I rediscovered (or rekindled?) my love of Western Massachusetts, specifically the Pioneer Valley. I spent a lot of time in Northamption, Amherst, Hadley, and Deerfield- especially the historic area- lined with pretty houses, old fences, and plenty of flowers. I stopped by the area one afternoon in July to take a walk while I waited for my friend to finish up at work so we could go about our scheduled plans. After taking a corner, I was greeted by all these bright and beautiful flowers- some that had grown almost as tall as me- and I took a few photos while trying to avoid the bees that were buzzing about.

This one was my favorite of the bunch. I love all the different colors in this photo. 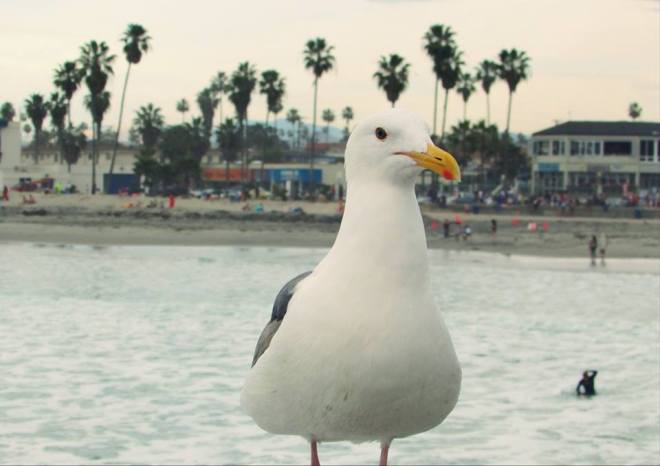 Days before the first of many historic blizzards and Winter storms were set to hit the East Coast at the beginning of the year, I was in sunny San Diego celebrating my 29th birthday with friends. On my last day before I was due to fly back home- I headed down to Ocean Beach- my favorite spot in SoCal. While there, I watched surfers ride the waves, ate some awesome tacos, and strolled the boardwalk- which is where I spotted this guy just hanging out. Even as I inched closer and closer to him, he didn’t budge- he just sat on the railing and watched me- and then he let me take his picture with the beautiful ocean and palm trees in the background.

Sadly, I didn’t see him this past October when I returned to San Diego for a vacation. 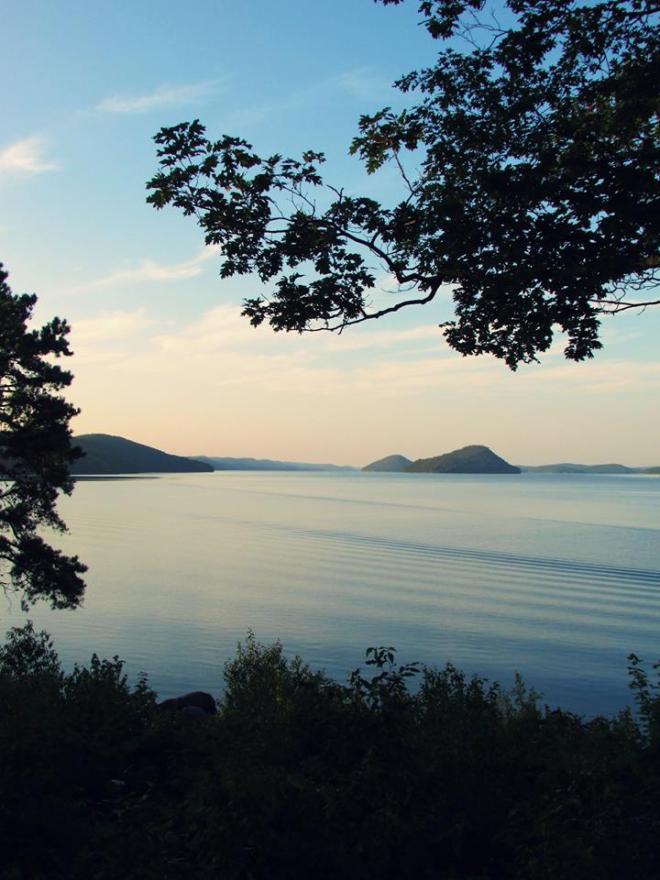 As Summer slowly but surely began to slip away, making room for Autumn- I headed out for one last evening hike along the Quabbin Reservoir one late afternoon in September before I made my way to Northampton for a dinner date. My timing as I hit the trails was perfect, because I caught this beautiful and serene shot just as the sun was first beginning to set. I was the only one there for a short period of time before a couple of hikers came by, and I remember just being so blown away with how lovely the water looked as it reflected the sky. It was like something out of some far away fantasy movie.

It’s a shame swimming isn’t allowed in the reservoir- because I would have dove in- in a heartbeat! 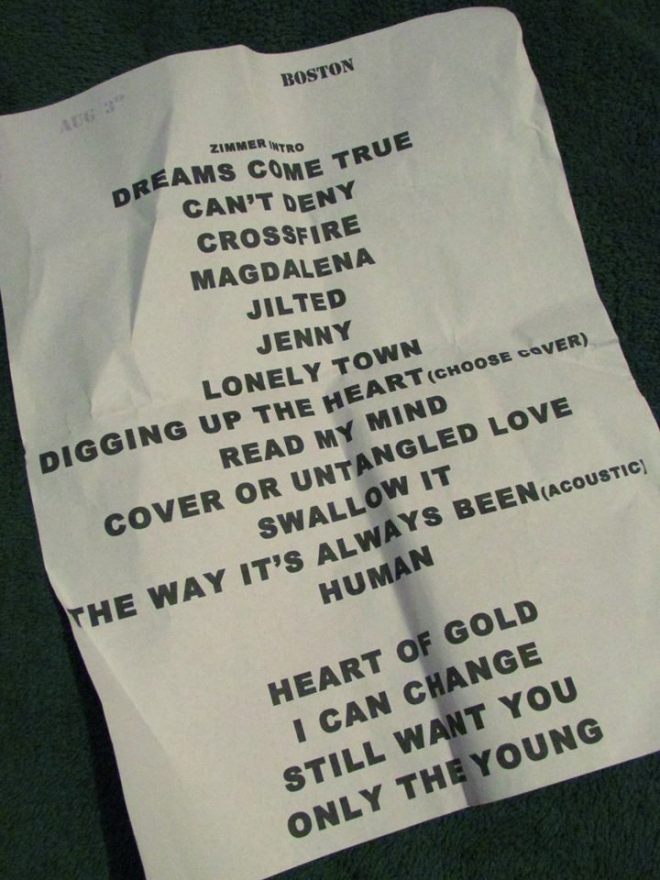 I had mentioned it above with my photo with Hayley Atwell- but August 2nd-3rd were so unbelievably fun for me. The 3rd, my second day of getting to spend time with my Irish BFF, Steven- was also the day Brandon Flowers brought his ‘Desired Effect’ tour to Boston. Since my teens, The Killers and their individual solo work have played an integral part of my life. I’ve met so many people and have made so many friends because of the band’s existence and through their wide and diverse fan base- and their music has, on more than one occasion- been a soundtrack to different ups and downs since my late teens.

The set list shown above, a gift from Steven after the show- marks my final B.Flow performance of my 20’s. Come mid-January, I’ll be entering my thirties, and while I don’t anticipate never seeing a show again, ever- it’ll be within a whole new era of my life. 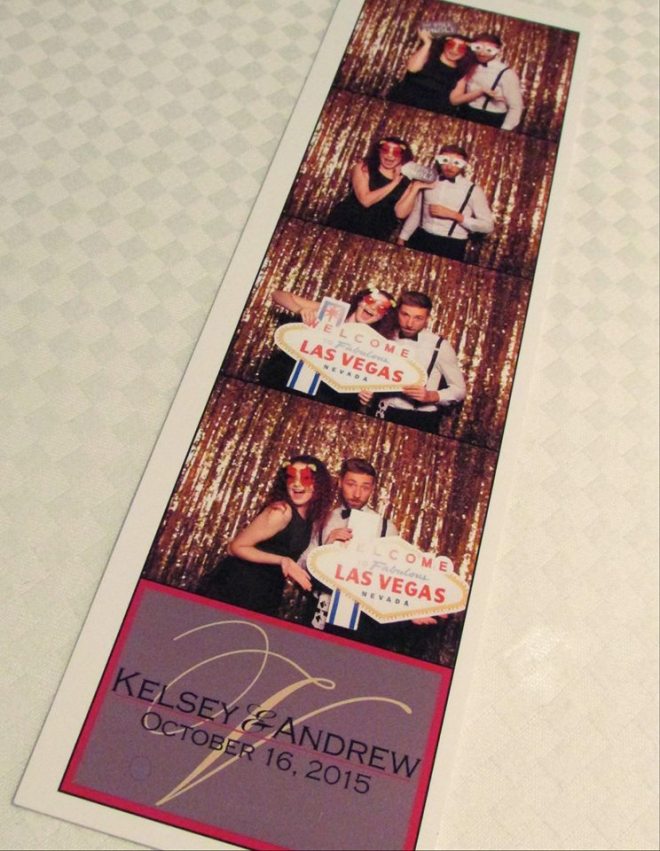 Despite the fact that we’ve known each other for 20 years, my best friend Sean and I have never actually taken a vacation together (apart from the occasional weekend in NYC or New Hampshire or something.) All of that changed when my long lost twin sister, Kelsey, tied the knot in Las Vegas this past October and Sean was more than happy to fly across the country and come along as my date. We had an absolute BLAST there- from hitting the strip, going from casino to casino, to being apart of Kelsey’s beautiful ceremony at the M Resort- which marked my first time seeing her in a few years! It was by far one of the best trips I’ve ever been on- and the photo-of-the-photobooth-strip above is just a snippet of our overall carefree and silly attitude during our stay.

We’ve already agreed that we need to head back to Vegas together A.S.A.P. and catch a show or two (and do some gambling.) Maybe it’s in store for 2016? We’ll just have to wait and see! 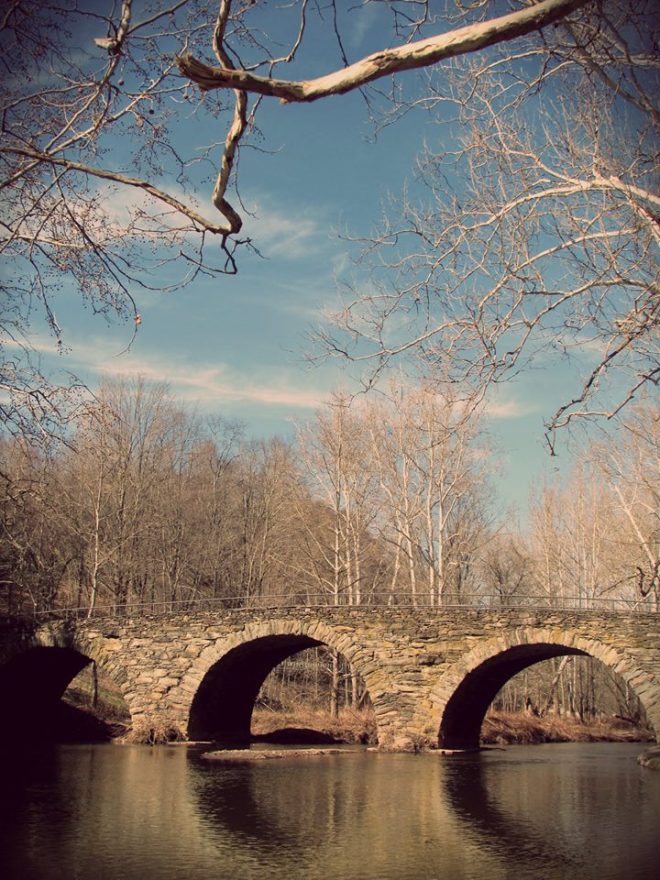 In April, I set off to Bethel, New York, for a long weekend of relaxation in the middle of nowhere and to revisit areas I had stopped by with my parents during a family holiday over five years ago. One spot in particular, the Stone Arch Bridge, proved to be one of my favorite places to pause, sit, and take a few photos. The area was still feeling the aftermath of Winter (the trees were bare and it was a bit chilly out) but it ended up working in my favor. I loved all of the pictures I took during my stay- but this one in particular really caught my attention while I was reviewing it after I’d come home. It’s very similar to a photo my father took the last time I was there (only the trees were much fuller and I was actually on the bridge in his version.)

And there it is! My top ten photos from this past year. I’m very pleased with my list- and I’m looking forward to snapping even more pictures come 2016 with all the big plans I’ve been making for the upcoming year!