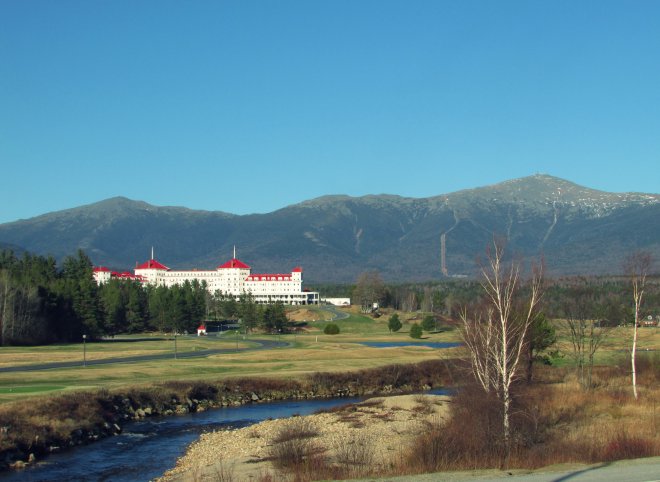 How in the world are we already in May?! How did that happen? It feels like Spring only just started (with a little fight from the Winter with some final flurries and sleet a few weeks ago) and Summer is already on the horizon- getting ready to push itself into the picture. I’m still trying to organize and enjoy my Spring wardrobe, for crying out loud!

But before I get ahead of myself and go into all of the things I have planned for May and the impending Summertime fun, I have to tip my hat to April- one of the busiest months I’ve had in a while! The most notable thing about this past month was that I was rarely home for most of it. I had headed down to Virginia and D.C. for a long weekend at the beginning of the month, then divided my time between work and Western Massachusetts (where I ultimately turned down the apartment I had mentioned falling in love with back in March because it’s location was, unfortunately, not convenient enough for my commute to/from work after some research and test navigation)– and rounded out the end of April with a long stay near the base of Mount Washington where I got back in touch with nature in a pretty unexpected and thrilling way. 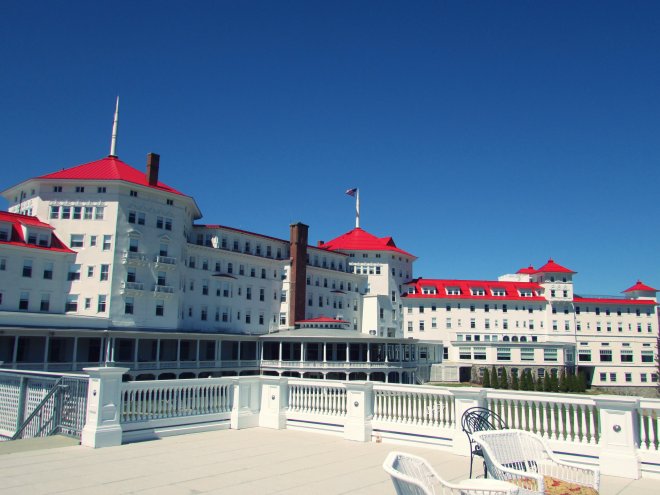 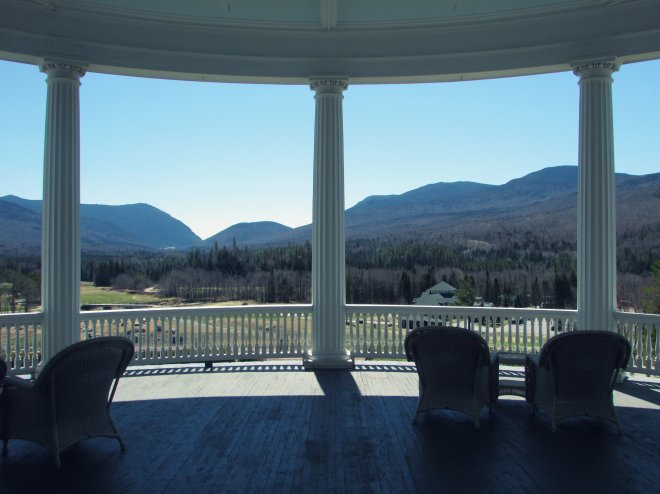 Last weekend, Sean and I headed up to Bretton Woods, New Hampshire for a couple of days at the Mount Washington Hotel and Resort– a hotel we’d spotted during a weekend outing in the same area a couple of years ago and had added to our collective “To Do” list ever since. I had this past weekend (as well as this current weekend!) off due to some training at work I had participated in- so we took the opportunity to take a mini-trip together since we’ve both been so busy and preoccupied with our jobs and other plans.

For those who might think the hotel- isolated within a mountain range and with Mount Washington looming not far in the distance- looks a little like something out of ‘The Shining’- you’re not wrong! While the actual Overlook Hotel (really called the Stanley Hotel) is located in Colorado- hotel staff at the Mount Washington Hotel told Sean and I that Stephen King was inspired to pen ‘The Shining’ after a stay there way back when.

And I can see how he’d be inspired. Not only is the resort sprawling and MASSIVE– but it’s still got historical charm, too. The furnishings in the lobby, the outdoor promenades, and even our room- were elegant and old fashioned.

And yeah, the place is rumored to be haunted, too- with the room reported to have the most supernatural activity being just a couple doors down from where Sean and I stayed. We didn’t see any ghosts while we wandered around the property, though- not even late at night when most of the hotel’s common areas were pretty much deserted. 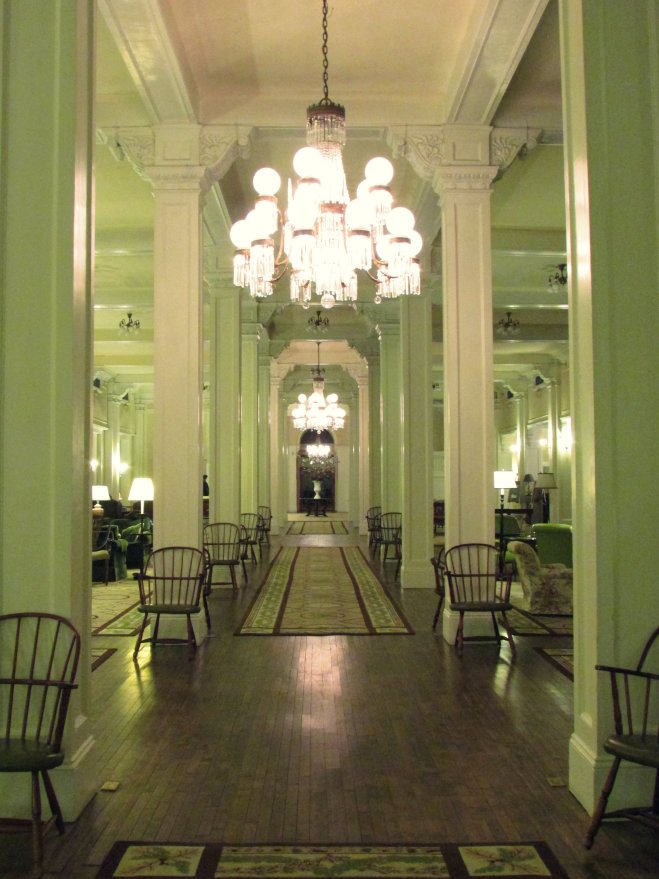 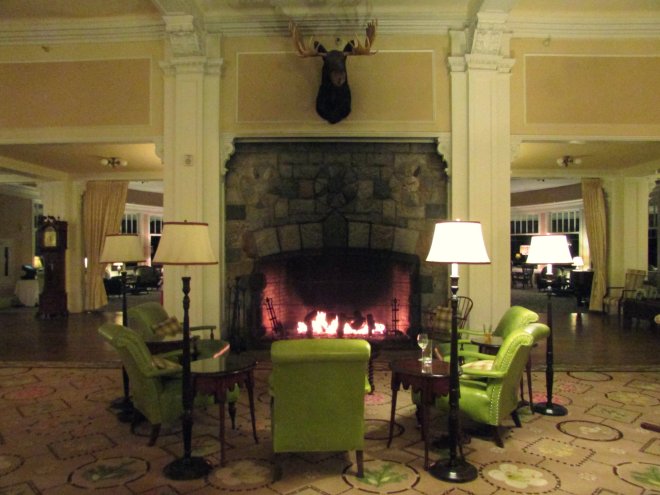 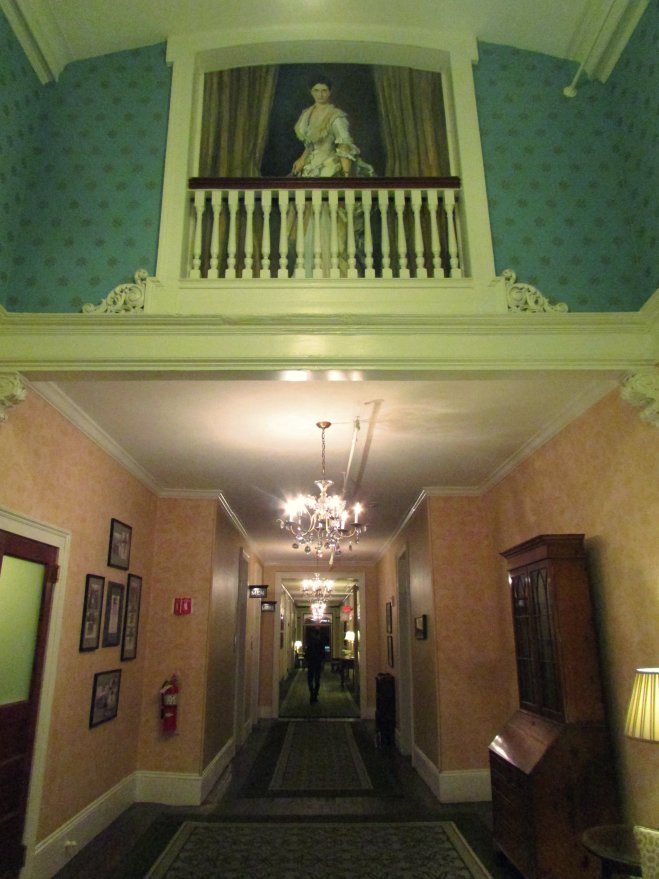 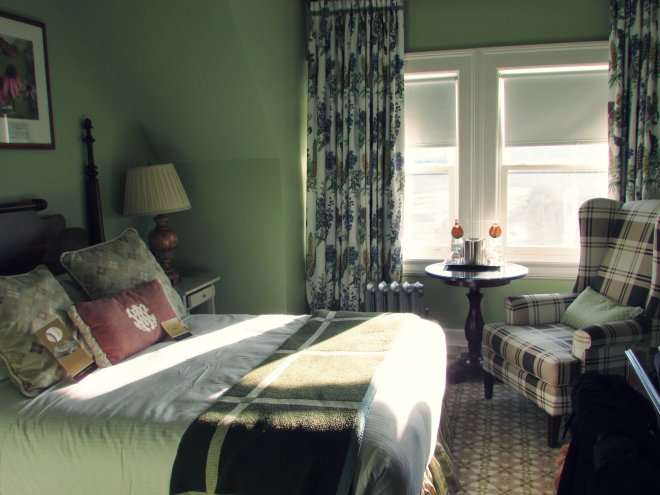 The resort had plenty of room to move around and plenty to do- including indoor  & outdoor pools, a spa, gift shops, it’s own post office (!!!), stables for horseback riding, hiking trails, fire pits for roasting marshmallows, a small cinema, a former-speakeasy-turned-underground-bar, a cafe and an arcade- all of which Sean and I explored and took advantage of- and the food the hotel served was pretty incredible, too. After we’d arrived, Sean and I had dinner in one of the main dining halls where I’d all but licked my plate clean after wolfing down a REALLY good meal- and the following morning’s brunch- with a seat overlooking the mountains- was one of the best I’ve had in years (I ate so. much. salmon.) 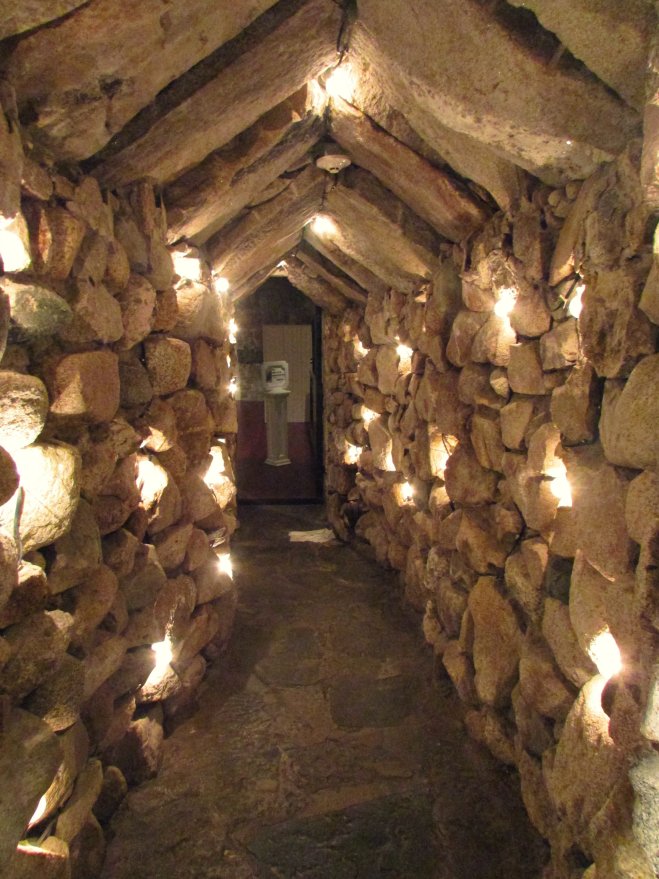 The entrance to the resort’s bar, ‘The Cave’. 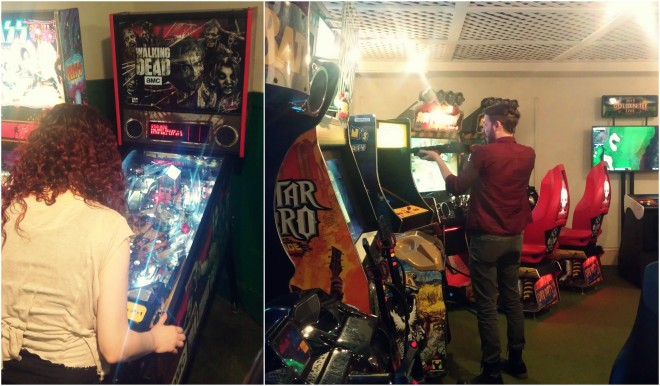 On Sunday, our last day at the hotel and resort- Sean and I took advantage of the nearby ski area- signing up for an afternoon of hiking, rappelling, and zip-lining through and across the mountain ridges. I’d never rappelled or zip-lined before, but after a couple of hours of adrenaline rushes and dangling REALLY high in the air- I think I got the hang of it. Our tour guides were awesome, supportive, and very funny guys- and Sean and I had a lot of fun getting to know them and the handful of others in our group who had a similar idea and had fearlessly joined along with us. 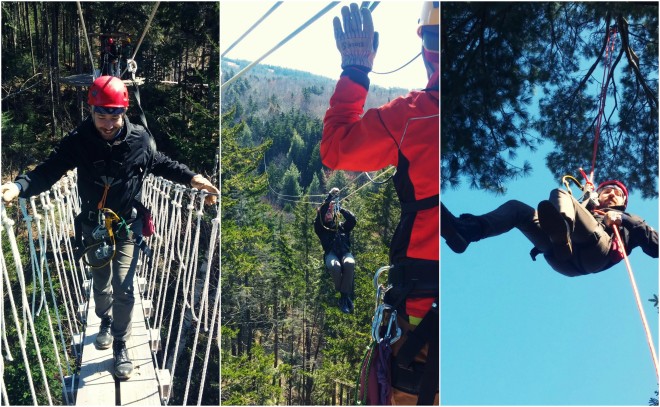 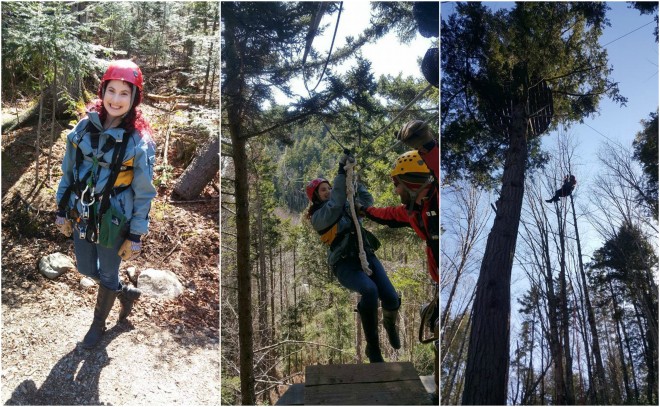 Those are just some of the shots of us in action. It was a BLAST- although it got pretty cold up there on the mountaintops!

Sean and I have already vowed to head back to the resort later on this Summer to participate in the warmer-weather activities (horseback riding! Swimming!) we didn’t get around to this time. I’m so excited. I loved the place and I definitely want to go back as soon as possible.

And now with May arriving tomorrow- and the weather FINALLY staying somewhat consistent in recent days/weeks- I’m hoping to spend even more time outdoors and on the road. I have a few more recipes up my sleeve, a couple more ‘Closet Crushes’ to share- as well as my Spring/Summer fitness tips & tricks for anyone else who is looking for some ways to feel a little better post-Winter-blues. I’ve also got a fun giveaway I’m finalizing as a little pick-me-up in preparation for Summer- and a whole lot more to share!

So long, April. You were beautiful, adventurous- and quite daring! 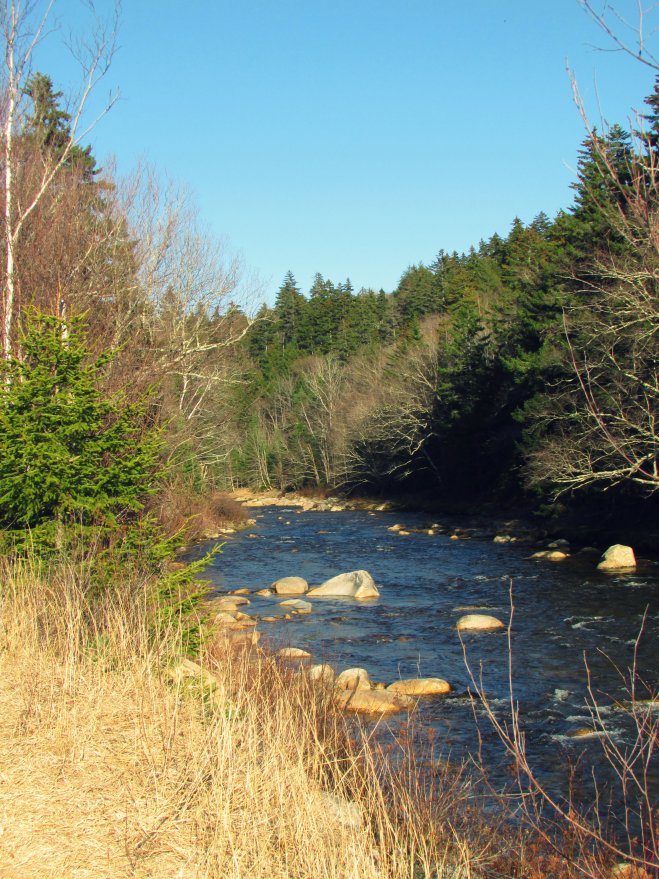 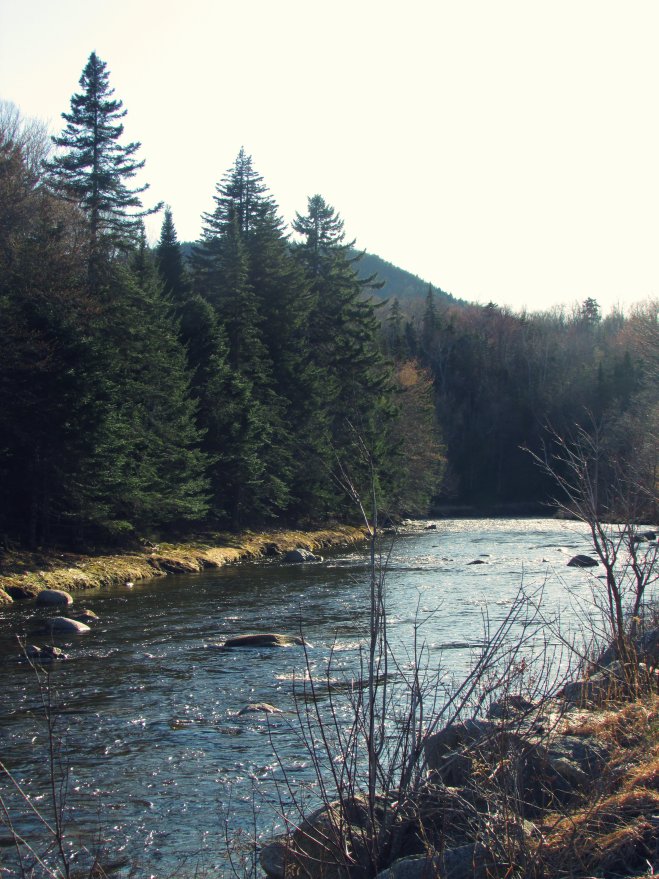