It’s always sort of surreal returning from a vacation on the opposite coast- like I’m re-entering the Earth’s atmosphere for the first time in years. My mind is fuzzy and foggy, my body (usually) aches from long plane rides, and it takes me a couple of days to adjust to the time zone and climate change- especially this time of year where I spend more than a few days in Summer-like temperatures and then return home to Boston where it’s particularly chilly.

I digress- I’m back from a near-week-long trip to fabulous Las Vegas and sunny San Diego! I hit the ground running, having jumped right back into work at my office mere hours after my plane touched down- and I fully admit that I’m way, way behind on my e-mails and messages (but plan to catch up today!) Sometimes it’s just really nice- and healthy- to unplug for a while. I can’t even tell you all how many people I saw during my trip that were so immersed in the screens of their phones/tablets that they were oblivious to everything and everyone else around them (including bumping into so many people/things!) and couldn’t really experience the excitement of Vegas or the beauty of Southern California right there in front of them.

And then there were the planes- where people flat-out REFUSED to stop mindlessly scrolling through Facebook and Twitter (much to the aggravation of the poor flight attendants) before and during take-off. On my flight home, a layover from Nashville to Boston- the man sitting to my side was back on Facebook the second the plane touched down- before we’d even come to a full-stop and pulled up to the gate! He was just furiously scrolling like his very existence depended on it!

It was eye-opening, for sure.

And yes- I occasionally updated Instagram and other social media from time to time during my vacation- but I made a point to have face-to-face interactions and dialogue with the people I care about out West, and whom I don’t get to see nearly as often as I’d like. I highly recommend it for those who plan to be traveling soon (or even just sticking around where you live!) Put the phones/tablets away for just a little while. I promise, all those Facebook photos and Tweets will still be there when you get back!

But here I am getting preachy when I don’t mean to. My apologies!

The view from our breakfast table! 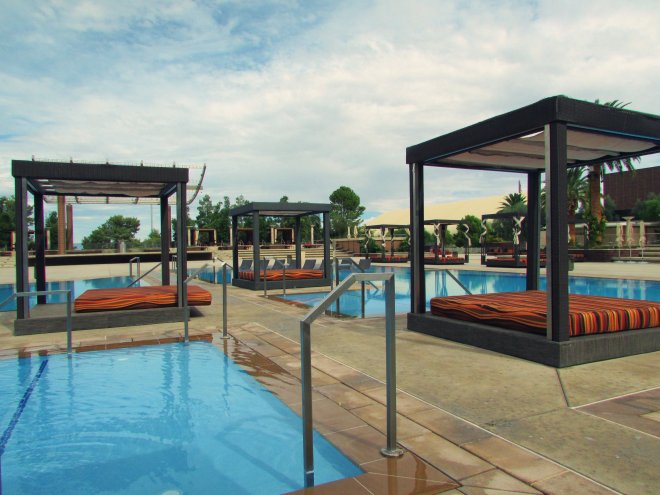 My main reason for visiting Las Vegas was for my beloved friend Kelsey’s wedding to her very lucky (now) husband, Andrew. I haven’t seen Kelsey since the last time I was in town- roughly 4-5 years ago- but it was so great to be back. I had prepared for endless sunshine and heat stroke- but was pleasantly surprised that there were some clouds during my stay- and even some light rain! I think it followed me from New England.

Kelsey’s wedding took place at the M Resort Spa and Casino, which is also where I stayed with my best friend Sean- who arrived in town a few hours after I did (and who thought I wasn’t coming into Vegas until the day after he got there- which led to a very nice surprise in the lobby when he showed up and I was waiting to help him with his luggage.) The property is beautiful, about 15-20 minutes away from the Las Vegas strip but with an incredible view of the towers and casinos in the distance- so you can actually relax at night without being disturbed by loud music or bright, neon flashing lights in your window.

Sean and I spent a lot of time at the resort, mostly eating- because oh my God the food was amazing- and taking turns swimming in the gigantic bathtub in our room- but he had never been to Vegas before, and I insisted we catch a shuttle to the strip the day before the wedding to do a lengthy casino-to-casino tour so that he could drink in all the fun, tourist-y stuff the city had to offer a couple of geeks like us. 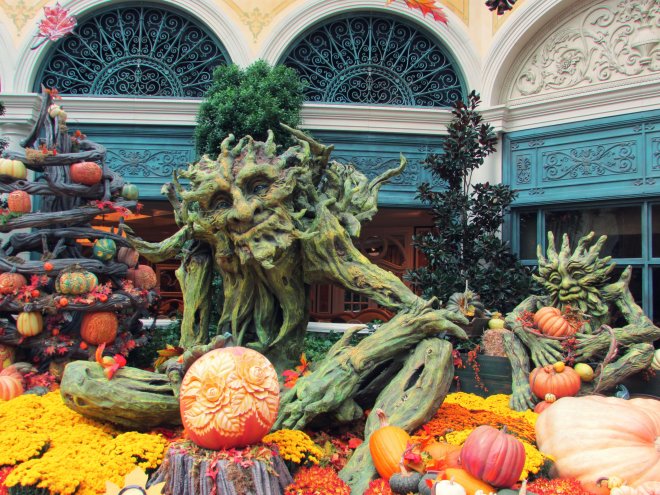 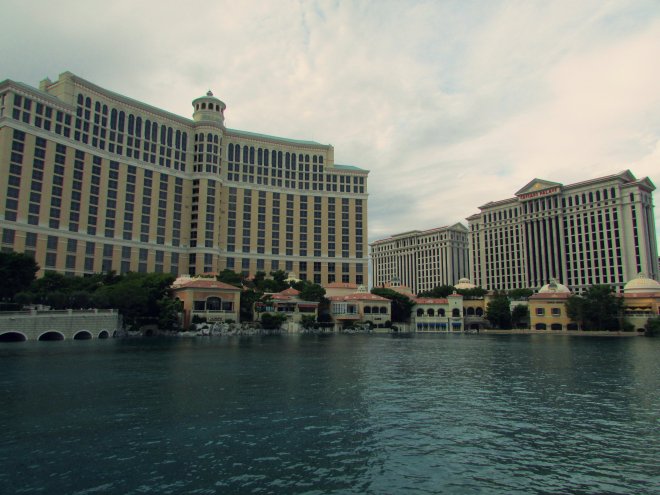 Sean and I got an early start, heading into town (by the Wynn) and working our way down the strip until we got to the Luxor and Mandalay Bay later on that night before we backtracked to the resort to sleep off a full day of walking, running, sight-seeing, shopping, and riding the roller coaster at New York, New York. Sean got to see his very first fountain show at the Bellagio, while I got to ooh-and-aaah at the interesting decor in The Cosmopolitan (my favorite hotel/casino!)

We didn’t have the time- or the energy- to catch any of the shows taking place at any of the casinos, but I made a mental note to come back as soon as possible to see Britney Spears perform at Planet Hollywood and take a peek at the ‘Absinthe’ show at Caesar’s Palace because if you’re going to go to Vegas, you HAVE to see a show- right? 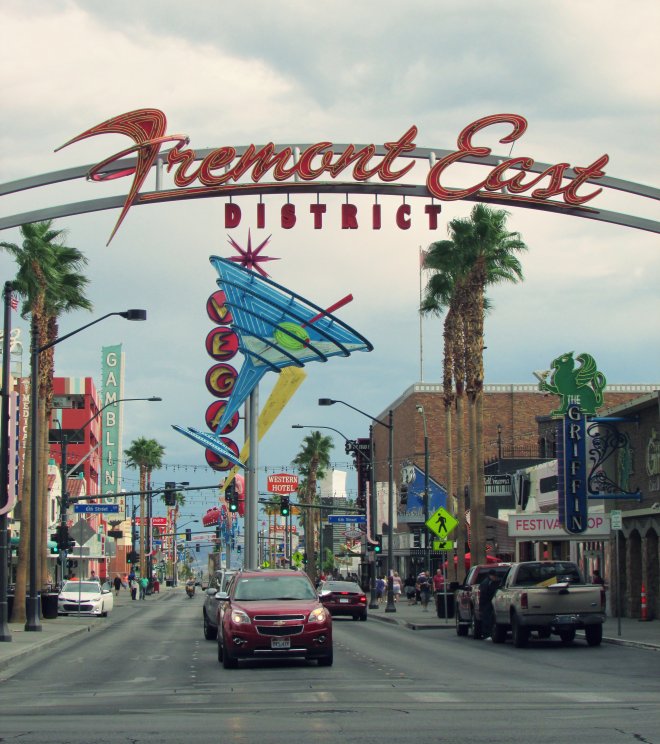 Since Kelsey’s wedding took place in the evening, and we had more than enough time to get ready- on Friday morning/afternoon, Sean and I once again headed into town so that he could see a couple more locations we didn’t get the chance to hit the day before- namely The Stratosphere and historic Fremont Street. During our brisk walk, we passed more than one drive-through wedding chapel (and sent our friends and loved ones a photo of the exterior of one particular Elvis-themed church asking them if we should take the plunge and get hitched for fun. The responses were golden.) and plenty of gift shops.

Sean, who has been terrified of heights during the entire 19 years I’ve known him- surprised me when he willingly took the elevator up to the top of the Stratosphere to get a bird’s eye view of the strip- and watch people who had WAY more courage than either of us free-fall jump from the top of the building (a new attraction that hadn’t been there the last time I was in town.) Maybe next time I can convince him to try it with me. I admit- it looked like fun.

Fremont Street, which has always felt delightfully dirty and sketchy to me- was a treat, too. I picked up a couple of SUPER tacky gifts for a few folks back home and ate a pretty fantastic street taco while we bobbed and weaved through the crowds under old neon signs and through historic casinos like The Golden Nugget and the Four Queens. By the time mid-afternoon rolled around- we knew we had to hightail it back in order to make ourselves presentable for Kelsey’s special day. 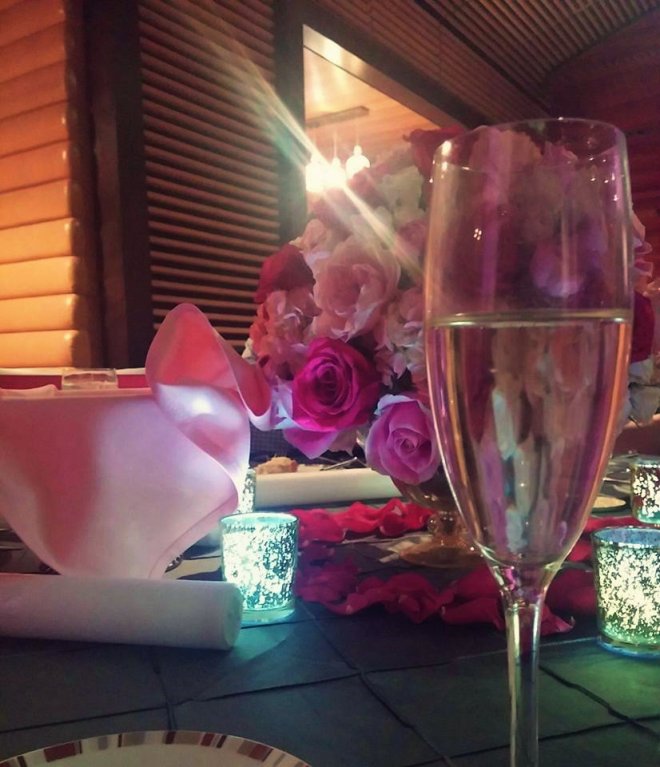 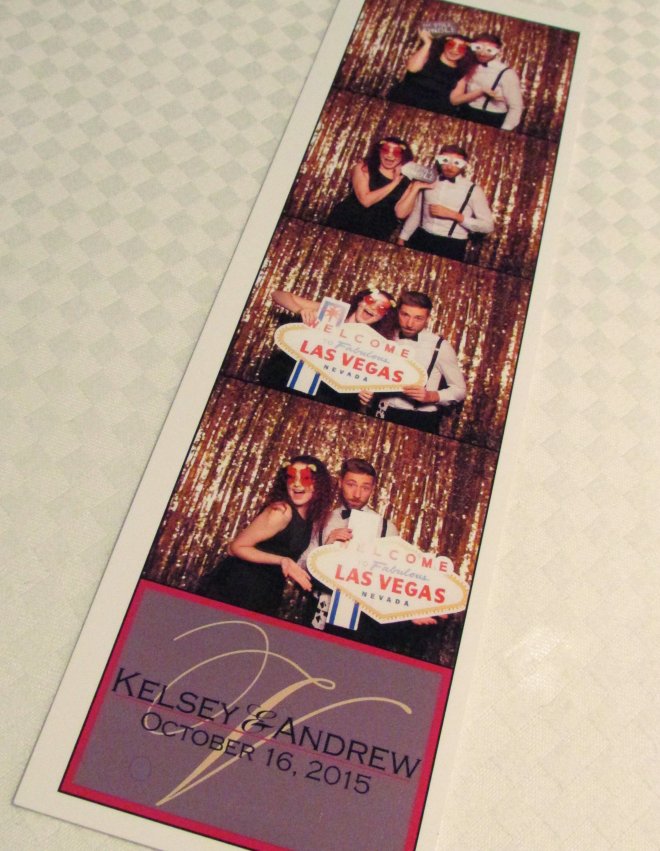 The wedding itself was beautiful. Kelsey looked absolutely gorgeous (which isn’t hard for her at all since I consider her to be one of the most stunning girls I know!) and the reception was one of the most fun things I’ve ever attended. It was a pleasure seeing some of our mutual friends (Erica! Beth!) and meeting loads of new people between drinking, dancing, and hijacking the adorable photo booth that was set up to commemorate the occasion. I am truly so, so happy for Kelsey and Andrew- and I wish them a lifetime of happiness, love, and good fortune. I can’t thank them enough for including Sean and I in something so wonderful!

On Saturday, following the wedding reception- Sean headed back to Boston while I continued West to stay in San Diego for a couple of low-key and relaxing days off the grid where I did my usual tour de force of my favorite burger and Mexican food restaurants- and had more than one night of late night drinking with my dear friend, Jimmy. It was the perfect way to unwind and prepare myself for the flight home and subsequent return to work and New England life.

I’m hoping the next time I head out to San Diego, it’ll be to move into a new apartment (fingers crossed!)

But now that I am officially back on the East Coast for the time being- it’s time to catch up on those e-mails, review the subscription boxes that arrived at my door in my absence, prepare to select a winner for my Halloween Giveaway, and get ready to watch a few more awful horror movies on Netflix!