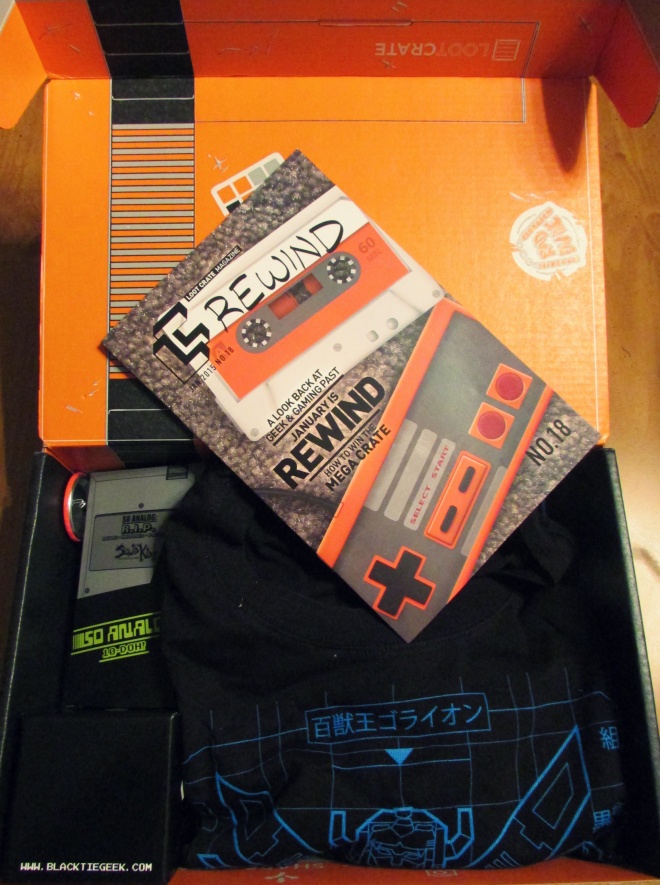 I was born in the mid-80’s, and with two older brothers- it didn’t take long for my childhood to revolve around over-the-top Saturday morning cartoons, sugary breakfast cereals, and video game consoles with poorly pixelated characters and scenery. As kids, my brothers and I pretty much fought on a regular basis over who got to play the Intellivision in our living room after dinner- which gradually transitioned into fighting over the Nintendo console (and then the Sega Genesis, and so on.)

When Loot Crate first announced it’s January theme- “Rewind,” a nod to those happy, simpler times- I was really, really excited to see what they’d put together. I fully and shamelessly get nostalgic now and then- so I thought an assortment of items that were throwbacks to when I was a kid would be a lot of fun and a great way to kick of another year of being a Loot Crate subscriber. 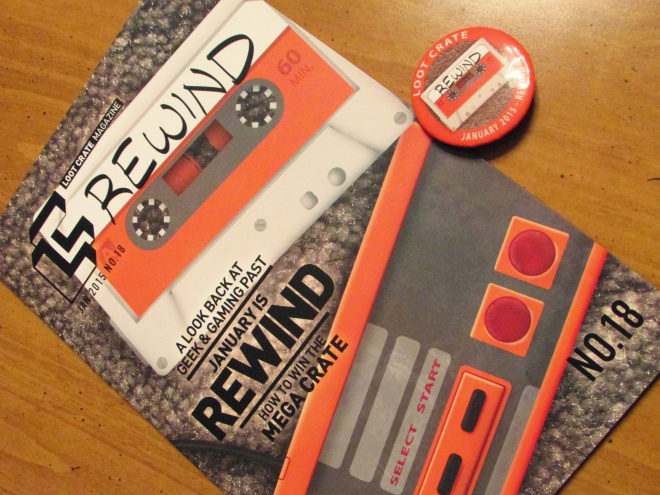 First up were the usual items: the monthly collector’s pin and the mini-magazine that detailed the contents of the crate, fan photos, and a glimpse into the Mega-Crate that a lucky subscriber can win. January’s magazine also included an article highlighting the lengthy and successful history of Nintendo, and re-visited the spectacularly cheesy ‘Voltron’ cartoon.

Not only that, but the back of the magazine itself could be bent and folded to form a bond-paper replica of the classic Nintendo controller! 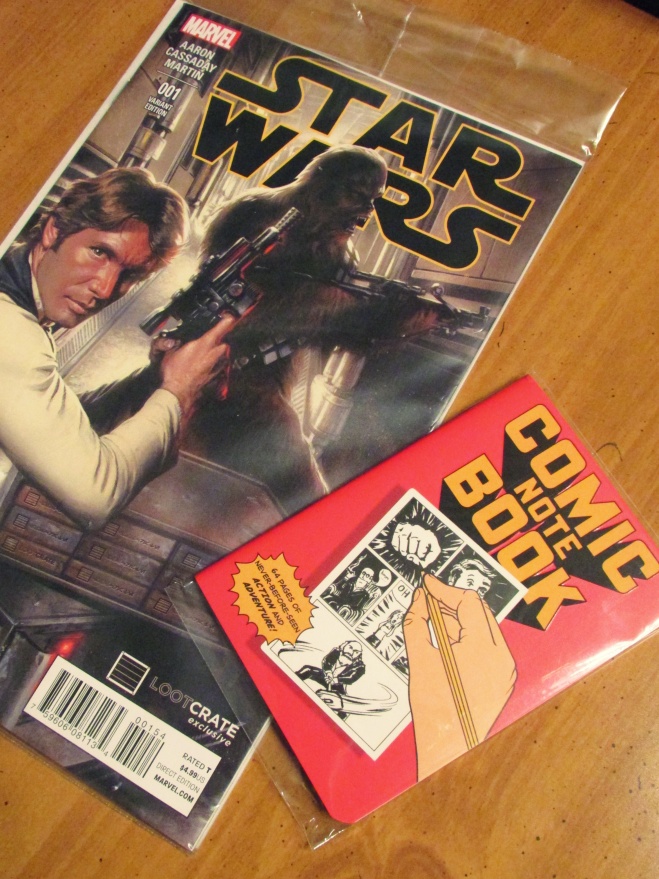 I love many things, two of which are ‘Star Wars’ and Loot Crate’s exclusive comic books. January’s box combined the two in the form of issue #001 of the Star Wars comic which features Han Solo and Chewbacca looking ready for a space shoot-out on the cover. I try to be as careful as possible when removing the comics from their packaging to read them- and this will be no exception. If the cover art is anything to go by, the illustrations in this book will be beautiful.

For the artists, aspiring comic book writers, or regular fans like me out there, this month’s crate also included this nifty little notebook with 60 pages of panels and stencils for dialogue/thought bubbles, etc. to create your very own comic book (or just doodle inappropriate cartoons like I tend to do from time to time.) I’m actually really excited to bring this with me the next time I travel- since it’ll give me something to do to pass the time and get my creativity flowing on the plane/train/etc. to my destination. 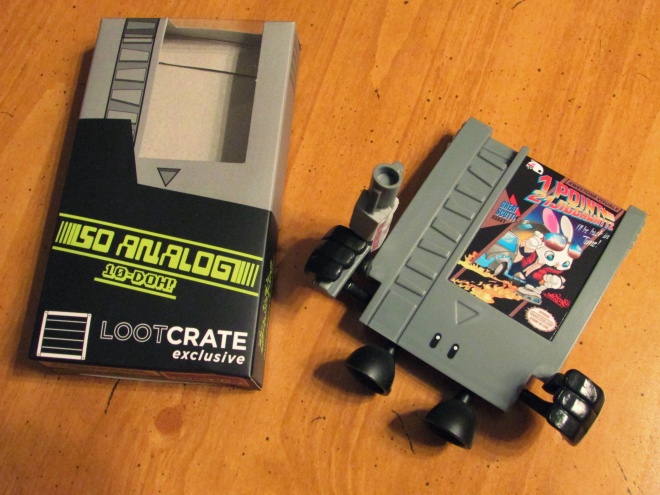 I also received a second Loot Crate exclusive this month- this one being this classic game cartridge figurine. After some quick assembly and positioning, this little guy has found a happy home up on one of my shelves- and I admittedly almost blew air into him to remove any dust like the good old days of desperately trying to get my Nintendo games to work properly. Ah, memories. 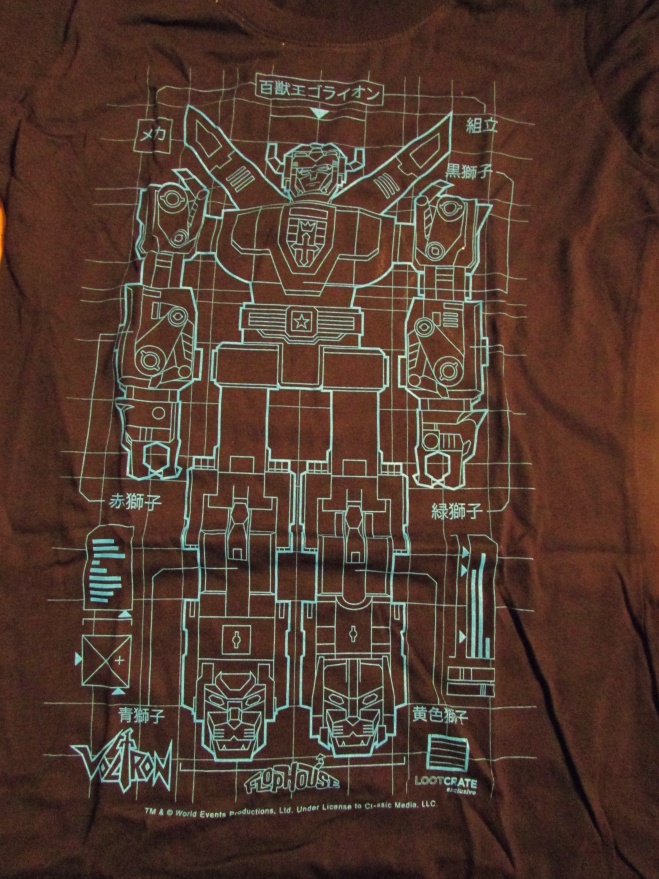 I love when Loot Crate sends subscribers t-shirts, because nine times out of ten- the fabric is so, so soft- the cut is really form-fitting- and the design is pretty cool. The shirt that came in January’s box was just that, featuring an elaborate blueprint of Voltron on the front of it’s lightweight and comfortable material. I’m looking forward to the warmer weather so I can wear this one out and about! 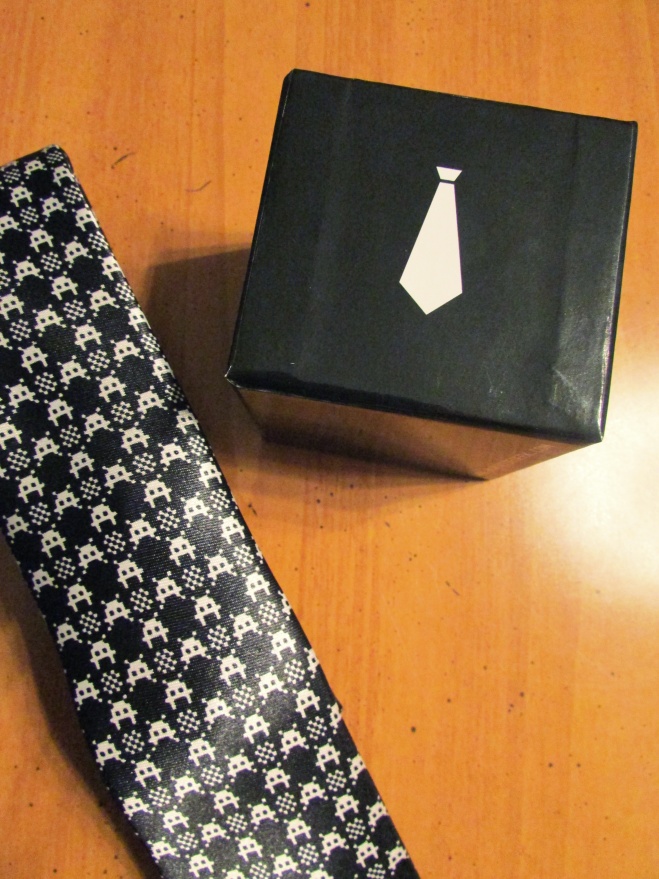 Perhaps my favorite item in January’s crate was this black and white Space Invaders-inspired tie from Black Tie Geek! What I liked best- apart from it’s really cute design- is that it’s unisex and can be worn in a variety of ways. It doesn’t have to go just around the neck, which is great for someone like me who enjoys wrapping my hair up with scarves and bands on more casual and carefree days. I’m looking forward to wearing this one very, very soon! 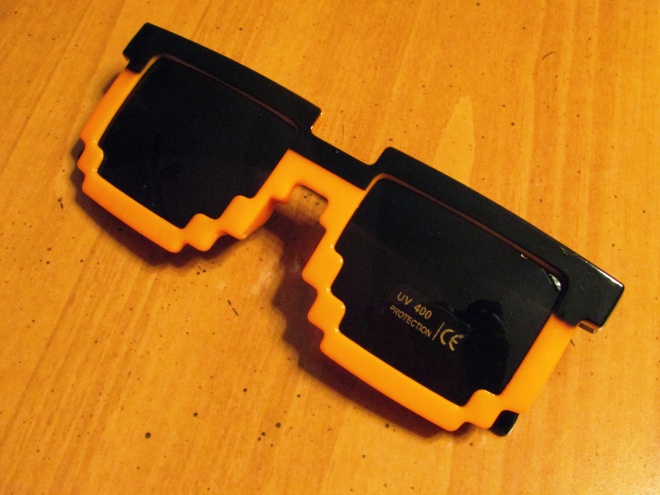 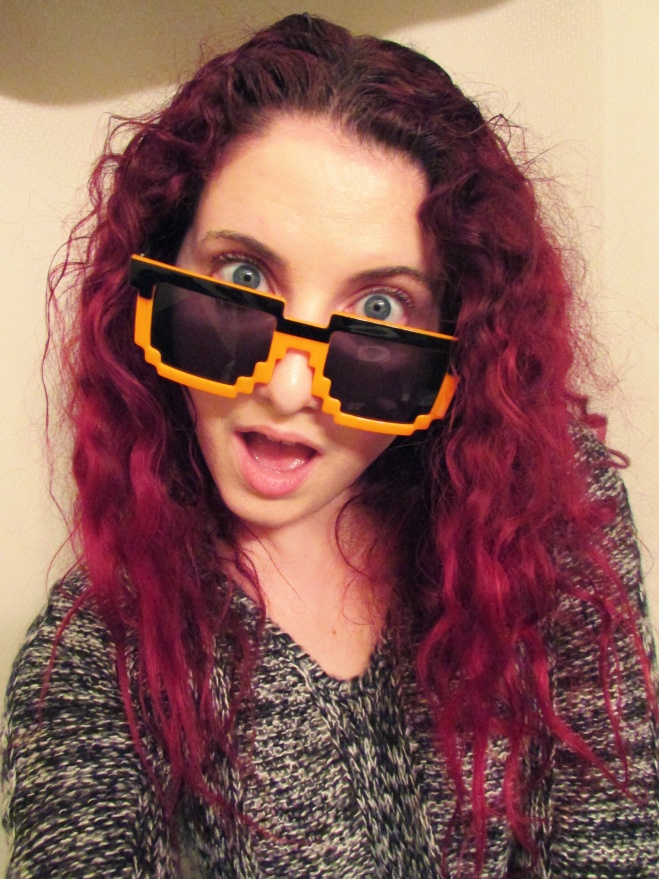 And finally, a couple of years ago at Boston Comic-Con, I was given a pair of novelty pixel frames, which- while fun- didn’t really serve a purpose other than decorative (I’m actually wearing them in my current profile photo on here!) I’ve only worn them a couple of times since receiving them, and they’re presently tucked away with my other accessories that don’t get much use.

I have a feeling I’ll get more wear out of these orange and similar shaped sunglasses (with UV protection!) since they actually serve a purpose- and don’t look half bad on me- if I do say so myself.

Overall I was- as usual- pretty happy with my Loot Crate. I loved the mix of items that I received and the theme was a nice way to revisit iconic figures and trends of the 80’s (without the shoulder pads or teased out hair.) I’ve already been told the theme of February’s crate (“Play,” as in board games and such,) so I’m once again really excited to see what’s just ahead for this subscription service!