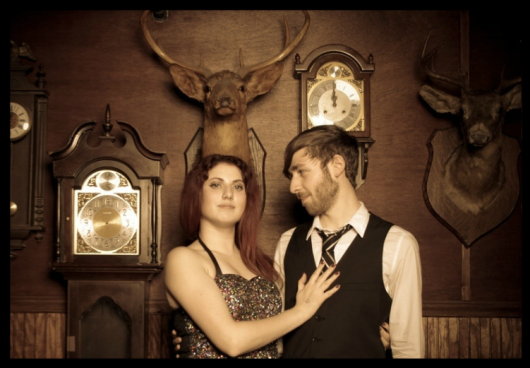 Monday night was, by far, one of the most amazing, intense, unique, debaucherous, and fun New Year’s Eve experiences I’ve had in recent memory. I think I’m actually still in the process of recovering, and this is coming from someone who usually bounces back fairly quickly after a wild night or a crazy weekend.

I have Sean to thank for all of it. For those who didn’t follow my old blog, Sean has been one of my best friends for the past sixteen years. He moved in next door to my parents’ house when we were little kids, and we’ve been pretty much inseparable since. As the years go by, we’ve continuously tried to outdo each other in terms of finding really cool, can’t-be-topped events and parties to go to.

As big fans of Punchdrunk’s “Sleep No More” (we’ve seen the play three times now),  when Sean heard they were throwing an extravagant New Year’s Eve soiree at their new home in NYC, entitled “The Royal Huntman’s Ball”, he knew I’d be up for it and jumped at the chance to get us tickets.

I’ve never spent New Year’s Eve in NYC before, and wasn’t quite sure what to expect, but when I walked out of Port Authority after a four hour bus ride from Boston, and saw the Empire State Building twinkling multi-colored lights, and heard people yelling “Happy New Year!” to the NYPD Officers who were lining Times Square, I knew I was in for a memorable night that would go down in history.

And I was right.

Of course, such an unforgettable night called for an unforgettable dress. Enter Modcloth’s (my ultimate online shopping addiction) “Glitz All or Nothing” Dress, which garnered a lot of attention and compliments over the course of the night with it’s sparkles. 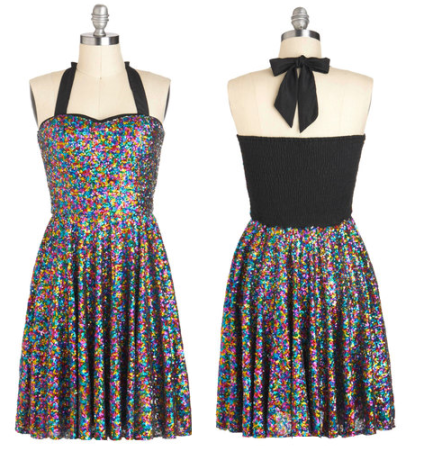 Once we reached the McKittrick, we were swept away to an absolutely delicious three-course dinner where we were sat with other attendees, donned in ballgowns, tuxedos, and top hats. We toasted with Chardonnay and got to know one another before we headed into the performance. Each time I see it, it’s different, but still incredible in it’s own inexplicable way.

For those who aren’t familiar with “Sleep No More”, here’s a pretty good summary taken from the play’s Wikipedia page:

“Sleep No More is set in a building with five floors of theatrical action, putatively called the McKittrick Hotel, though with many rooms and features not normally associated with hotels, including those which resemble an antiquated lunatic asylum, doctor’s offices, children’s bedrooms, a cemetery, indoor courtyards, shops, a padded cell, a ballroom, taxidermist’s menageries, and so on. The actors and their environment all adopt the dress, decor, and aesthetic style of the early 20th century, inspired by the shadowy and anxious atmosphere of film noir. The production “leads its audience on a merry, macabre chase up and down stairs, and through minimally illuminated, furniture-cluttered rooms and corridors.” Audience members begin their journey in a fully operational lounge, the Manderley Bar, from which they enter an elevator that transports them to the major floors of the “hotel.”

Sleep No More tells the story of Macbeth, though the audience is given no programme and there is no speaking from either the actors or audience. The actors (unlike the audience members) wear no masks and perform in passionate, silent, interpretive group settings, solitary scenes, and, sometimes, dance sequences. Audience members are instructed to remain silent and masked at all times once they have boarded the hotel’s elevator up until the time they return back to the Manderley Bar; however, they may move freely at their own pace for up to three hours, choosing where to go and what to see, so that everyone’s journey is unique; they may also exit the premises at any point. Audience members may thus follow one or any of the actors throughout the performance, or they may independently explore the many rooms of the building; in groups or alone. Recorded music plays steadily throughout the building at all times.”

Because the performance is meant to be stimulating to all senses, it should come as no surprise that photography is strictly prohibited, hence the lack of pictures on my part. I left my camera and my cell phone in coat check, since you’re supposed to truly experience everything, not live through a series of photographs.

However, the theater company did have a photographer on site (Monica Simoes) to capture some of the action from dinner and the ball. The gallery can be viewed by CLICKING HERE.

After the final scene, it was time to dance and drink the night away until the clock struck midnight, and then dance and drink some more. There were two very different settings to choose from- the jazz lounge, which featured some great live punk Celtic & bluegrass bands, some of which yours truly danced and twirled ’round and ’round to until I got dizzy- and the grand ballroom, which was more club music (and a little too much dubstep for my liking), but still very fun. Sean and I bobbed and weaved between the areas, taking in the sights and sounds, and even stumbled on a vintage photo area set-up where we had the picture at the top of the entry taken together.

We were in the grand ballroom when the countdown to 2013 reached it’s final minutes, some of the cast of “Sleep No More” on stage to take us through the last seconds of 2012 before we were showered with confetti from the ceiling. Truly an incredible moment.

By 2 a.m., we were tipsy and spent. Our feet were starting to hurt, and we still needed to check into the tiny hotel we managed to find and book last minute on the edge of Wall Street. Grabbing our coats and our bags, Sean and I bid adieu to those still partying in the McKittrick, probably until the wee hours of the morning, and braved the cold. Everyone was trying to get a cab since Times Square was still clearing out, so we walked most of the way, meeting all sorts of fun people who were still feeling very celebratory despite the chill in the air.

Side note: I never want to hear another vuvuzela horn as long as I live. Hearing about eight of those at the same time at 2:30 in the morning will forever be burned into my brain.

We overslept a tad on New Years Day (a well deserved rest, in my opinion), and hurriedly got ready to spend a couple of hours in the city before we headed back to Boston. As was the tradition whenever I went to NYC with my dad, I made a stop at St. Patrick’s Cathedral to light a candle and say a prayer to in his honor, and then went to grab brunch at the Cosmic Diner, where Sean managed to snag the first picture of me in 2013- and I’m actually smiling in it!

I also have insanely frizzy bed head, and am about to stuff my face with Greek omelette, but still- all smiles!

Another four hour bus ride shortly after brunch, and I was back in Boston and getting ready to go back to work. Needless to say, I had a blast. It was so incredible to be in a city I love, with one of my most beloved and treasured friends, meeting new and exciting people, and ringing in an entirely new year filled with entirely new possibilities.

If New Years Eve and New Years Day were any indication of how the rest of 2013 will be, then I’m very, very excited.

And to close out this first real entry in my new blog, a silly little tradition of mine is to start the year off with a song, a theme, if you will. I couldn’t think of a more appropriate track than Florence & The Machine’s “Shake It Out”. It’s perfect.

Regrets collect like old friends.
Here to relive your darkest moments.
I can see no way, I can see no way,
And all of the ghouls come out to play,
And every demon wants his pound of flesh,
But I like to keep some things to myself.
I like to keep my issues drawn.
It’s always darkest before the dawn.

And I am done with my graceless heart,
So tonight I’m gonna cut it out and then restart.
Cause I like to keep my issues drawn.
It’s always darkest before the dawn.

And it’s hard to dance with a devil on your back- so shake him off.

And given half the chance would I take any of it back.
It’s a fine romance but its left me so undone.
It’s always darkest before the dawn.